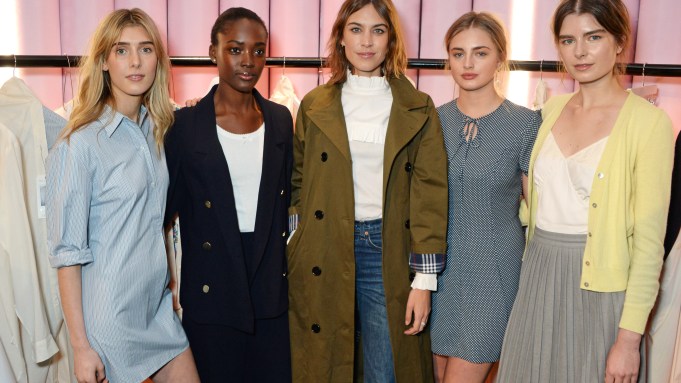 HISTORY LESSON: “It all started with ‘the skirt’,” said Marks and Spencer style director, Belinda Earl at the launch party for Archive by Alexa, the British label’s new capsule collection with Alexa Chung.

Earl was referring to the A-line number from last season that was snapped on It-girls ranging from Olivia Palermo to Chung herself. It proved the genesis their collaboration.

The 31-piece line is inspired by archive pieces from the Forties to the present day, eight of which were on display during a launch event in London. Archive by Alexa launches April 13, with prices ranging from $28 to $128.

There was a Forties work shirt re-imagined as an oversize blouse – or a shirtdress for the brave; a paisley print minidress that took its cue from a Fifties cleaning apron; a camisole top that riffed on one of the label’s night dresses; a gabardine coat and gray pleated skirt reminiscent of a school uniform; and a double-breasted navy blazer with gold buttons.

“We were really keen to bring the archive to life – it’s on permanent exhibition in the Michael Marks building in Leeds in Northern England where all the garments hang in beautiful white calico bags,” said Earl. “We talked about things like the pleated skirt which brought back happy memories of being at school,” she noted of Chung’s input in the design process.

One of Earl’s favorites is the lacy camisole. “It’s based on a nightdress circa 1950, and although there were fabric shortages due to the Second World War, we still had lace, so a lot of beautiful pieces were inserted as panels.”

Modeling a frilled shirt from the collection and nursing a medicinal whiskey for a croaky throat, Chung said she has always had “an affection for Marks and Spencer. There was something very touching about looking back through the British fashion and social history for which the brand is synonymous.”

The event was quite the family affair for Chung. Her parents were in attendance – and after introducing a short mood film directed by Tom Craig, she enjoined everyone to head downstairs and party. “My brother is deejaying so we can all go down and enjoy his beautiful dulcet tones.”