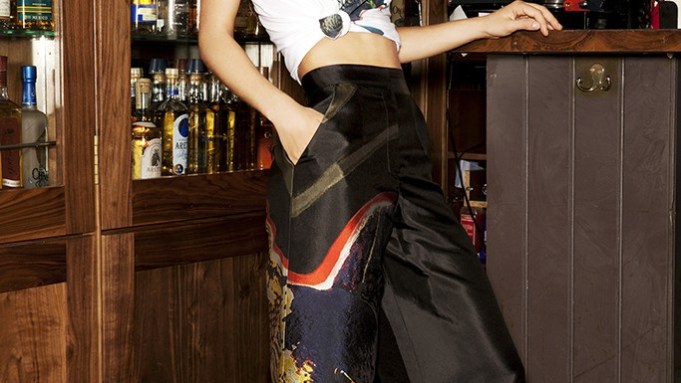 The London-based, Brazilian-American designer Alexander Lewis is on Friday launching his first main season collection for fall 2014, via KCD’s online show portal, digitalfashionshows.com, with a film showcasing the collection to be streamed at 9 a.m. CET. Lewis’ move to launch the capsule collection comes after having established his label with pre-collections since he launched for resort 2013.

And to lend the collection a point of difference from his pre-collections, Lewis has worked together with the French artist Marie Angeletti in a process he calls “artist intervention.” Some of Angeletti’s photographs appear as prints on Lewis’ streamlined silhouettes, such as shirt-dresses and silk shell tops, while others have been woven into the garments’ fabrics. Working with the English silk weavers Stephen Walters and Sons, Lewis has woven Angeletti’s images into pieces such as silk bomber jackets and cocktail dresses. The motifs include a picture of a vase that Angeletti had photographed after commissioning a Chinese factory to decorate it, with details as minute as the reflection of light in the photograph replicated in the jacket’s silk jacquard weave, while one of Angeletti’s pictures of a flying eagle is woven into a silk dress and culottes.

Lewis, whose line is currently sold at Avenue32.com in London and at Barneys New York and Saks Fifth Avenue in New York, said that the collection’s sensibility will appeal to his private clients, many of whom inhabit the art world. “I watch that world a lot and react to it,” said the Savile Row-trained Lewis, who noted that he designs for a woman who dresses for “a situation as opposed to a season.” Angeletti — whose solo show at London’s Carlos/Ishikawa gallery runs through Saturday — has also directed the film that will be shown on the digital platform.

Following the digital show, the collection will be sold at Paris’ Agence Saba Demian from Friday. And Lewis plans to continue in an artistic vein for his next three main season collections, by collaborating with women in the art world.