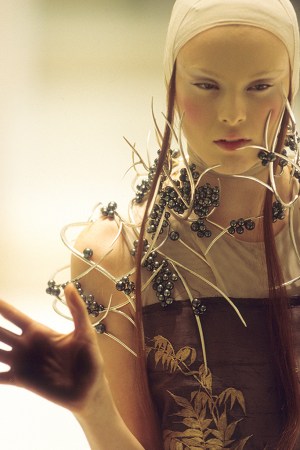 MCQUEEN’S MAQUILLAGE: In the wake of the hit “Alexander McQueen: Savage Beauty” exhibition at London’s Victoria & Albert Museum, London College of Fashion is staging a show that will showcase the inspiration and methods behind the often fantastical beauty looks created for the late Lee Alexander McQueen’s shows. “Warpaint: Alexander McQueen and Make-Up,” opens April 30 at London College of Fashion’s Fashion Space Gallery. It will spotlight work by make-up artists including Sharon Dowsett, Val Garland, Peter Philips and Topolino, all of whom worked on McQueen’s shows. Curator Polona Dolzan, curatorial and project assistant, Fashion Space Gallery, and Ligaya Salazar, Fashion Space Gallery director, who commissioned the show, will explore 22 of McQueen’s beauty looks through themes such as “Amplified,” when models facial features were distorted; Deviated, which hones in on body makeup and Stripped, which highlights the designer’s more polished looks.

LCF has also partnered with Holition, a London digital creative studio, to allow visitors to the exhibition to virtually try on three make-up looks from McQueen’s shows – one of which will be the butterfly-wing designs that were painted on models’ faces for the designer’s spring 2008 show La Dame Bleue. Dolzan commented that McQueen’s “completely open attitude towards experimentation allowed for his make-up team to test, innovate and push the boundaries of their discipline. All avenues were pursued to achieve the look just how he imagined it.”

Garland noted that all the direction for the make-up always came from McQueen’s singular “point of view.” “It had to be absolutely specific, he knew when it was just right, when it came as near as possible to his own vision of the look. There was no right or wrong, just his vision,” she said. The exhibition will run through to August 7.