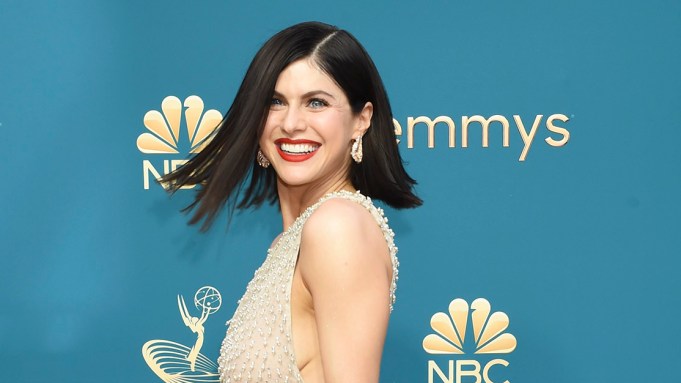 Alexandra Daddario attended the Emmy Awards on Monday in Los Angeles and chose a look from Dior.

The actress posed on the red carpet in an asymmetric pearl-embellished gown embroidered with rhinestone tassels from the brand’s spring 2022 couture collection, the theme of which was embroidery.

The semi-sheer dress was accessorized with a pair of diamond earrings in the shape of leaves and white sandals.

Showing off its delicate construction, Daddario playfully took a spin and the pleated skirt flared.

Daddario was nominated for Outstanding Supporting Actress in a Limited or Anthology Series or Movie for her role as Rachel Patton in the HBO show “The White Lotus.” The award was won by her co-star Jennifer Coolidge.

Her fellow co-stars Connie Britton and Sydney Sweeney were also nominees in the same category.

The 2022 Emmy Awards honor the best performances and programs in television. “Saturday Night Live” cast member Kenan Thompson hosted the event at the Microsoft Theater in Los Angeles. HBO’s “Succession” is leading the nominations with 25 nods, followed by “Ted Lasso” (20), “The White Lotus” (20), “Hacks” (17) and “Only Murders in the Building” (17). The Geena Davis Institute on Gender in Media was also presented with the Governors Award in recognition of its work to promote gender balance in the entertainment industry.