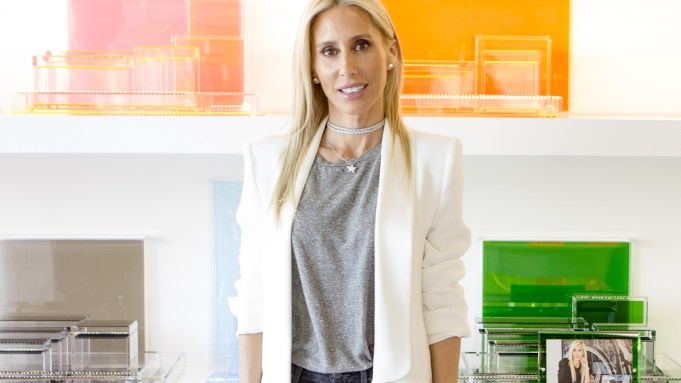 Alexandra von Furstenberg has seen fashions come and go, at the center of the Nineties New York scene as a social and front-row runway fixture, and from the other side, working alongside her then-mother-in-law Diane von Furstenberg. When she moved to Los Angeles to start a new West Coast chapter, she found her niche as a furniture and home accessories designer the way many designers begin — by identifying a void in the marketplace, or quite simply, because they can’t find exactly what they want so they make it themselves.

“I was in that moment in my career when I left fashion and wasn’t sure how to come back because I couldn’t really compete in the apparel industry. Lucite was always a fascination with me because I love Seventies and retro futurism. I felt like it was never used to its fullest potential, so that’s where I found that voice,” she said of her precisely hand-cut, modern pieces with clear or opaque colorways.

This weekend, von Furstenberg opens the doors to her new flagship at 300 North Robertson Blvd. in the heart of the West Hollywood Design District. It’s also located at one of the key pedestrian corners in the retail hub, just north of stores such as Chanel and Curve and two coffee shops. “I like that we are at a corner,” she said of the 1,500-square-foot space. When von Furstenberg opened her first store in 2008, on nearby Melrose Avenue she learned first-hand how retailers needed to adapt to weather the recession. (She has since outgrown the Melrose Avenue location, which is also slated to be demolished to make way for a new development.)

“When you first launch it’s always great, like, ‘Oooh, what is she doing?’ but then you have to have the lasting power, and during that time we also had the crash and there was a scary moment for sure. I first launched with only furniture and by 2009 I was like, ‘Oh gosh, what have I done?’ Nobody’s buying for home and Lucite is very expensive so it was hard to move merchandise.”

Her husband, Dax Miller, suggested making smaller pieces that people could buy more easily, and the rest is history. A glance at her Instagram account shows the various ways a person could want, even need, a brightly colored candy dish or tray, themselves as delectable as bonbons.

Fully conceptualized by DAX Design, Miller’s firm, the environment allows the pieces to shine in person — or in the case of the custom furniture and signature accessories, to absorb and refract light like faceted jewels. The 14 colors ranging from ultra bright to milky white and black, in clear and opaque variations, play well in the mostly white space. Her colorful lip-print logo — clearly she learned a few things from DVF — is placed strategically, as are some neon light installations, such as one above the sales desk that reads “von fabulous,” a phrase coined by her old New York hair colorist Steven Dillon.

In tandem with the store opening, von Furstenberg will introduce five new furniture pieces and new limited-edition accessories such as the Vortex vase and Asscher box. “Most people can’t just buy one. l love that. It means we are doing something right,” she said.

But she still makes clear Lucite because people ask for it. “You have to hear what your customer is saying otherwise they get grumpy. Because everything is available everywhere, the demand for ‘I need, I want’ is greater today.”

She sees another store in the five-year plan, perhaps in Miami, where her Made in Los Angeles pieces wholesale very well. The years of California living and retail know-how look good on her. She says, “Definitely in my 40s, with my brand, I’m much more the woman I was supposed to be today.”