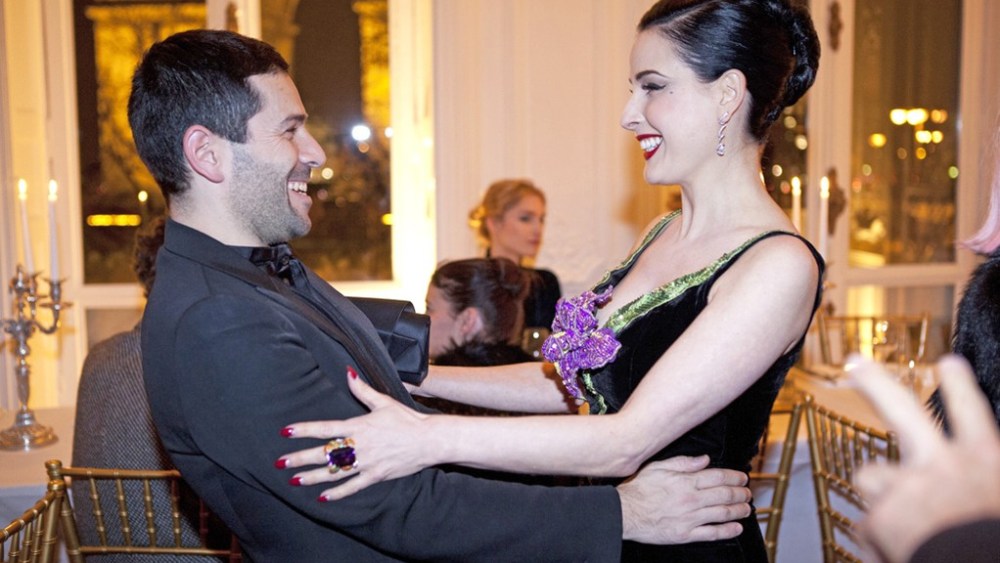 BIRTHDAY GREETINGS: Alexis Mabille celebrated his first decade in business on Monday with a little help from his friends.

Dita Von Teese, prima ballerina Marie-Agnès Gillot and pastry chef Christophe Michalak were among the guests who took in the French designer’s couture show at the Mona Bismarck American Center. Afterwards, 50 close friends made their way to the Pavillon Etoile, a stone’s throw from the Avenue des Champs-Elysées.

“I wanted to mark the occasion with the people I love, who have helped me a lot and who were the first to wear my clothes and support me after I left Dior,” said Mabille, who spent eight years working under John Galliano at the storied fashion house.

Bruno Frisoni and artist Marie Beltrami were among the first to arrive and headed straight for the caviar tasting station, which offered three varieties of Caviar Ultreïa, a new brand that will shortly open a private salon on Place Vendôme.

Sylvie Hoarau and Aurélie Saada — a.k.a. French pop duo Brigitte — took a break from touring to attend, wearing identical sequined black evening gowns with heart-shaped cutouts in the back — and a pocket just big enough to hold a business card, or a condom, depending on the occasion.

“I adore his vision of women: very feminine and quite cheeky,” said Hoarau, noting they had met at an amfAR gala in 2011. “We literally fell in love,” she recalled.

Gillot, wearing a vintage sequined Mabille coat with a thick black fur trim, got to know the designer at a dinner. “We started drinking champagne and we spent the whole evening talking, ignoring everyone else at the table,” she said.

The dancer, who appears in the Céline spring ads, is in rehearsals for “Tree of Codes,” a contemporary ballet by Wayne McGregor featuring a set design by Olafur Eliasson and music by Jamie xx. It will premiere at the Manchester International Festival on July 2, before heading to New York, Miami, Vienna, London and Paris.

Von Teese, having headed back to her hotel to change, showed up shortly before 11 p.m., to the relief of fellow guests who were keen to sit down for dinner. Wearing a vintage Mabille dress with a 3-D purple flower cleavage, she said her favorite outfits were the costumes he designed for her burlesque show.

“He made me three tuxedos, very beautiful, Marlene Dietrich style —  very difficult alterations, because it’s fitted over a Mr Pearl corset,” she noted.

After a noisy dinner, Mabille climbed on his chair to deliver a thank you speech against a picture window offering a view of the lit-up Arc de Triomphe.

Afterwards, guests moved next door, where the Brigitte girls perched on a narrow marble chimney ledge to deliver an impromptu three-song set, including a hyper-seductive version of their hit “Ma Benz.” Seated between them, Mabille beamed as the crowd erupted into a hearty chant of “Happy Birthday.”