The French designer is marking 10 years in business with the new collection. 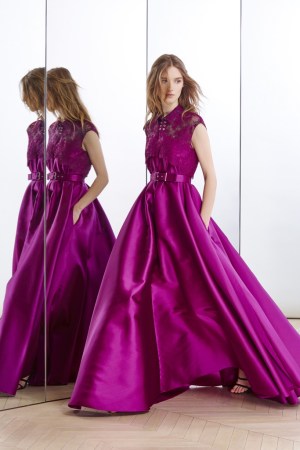 PARIS — Alexis Mabille is marking his 10th anniversary with the launch of a capsule collection of eveningwear that aims to capitalize on his red-carpet credentials.

The French designer, who has dressed celebrities including Keira Knightley, Zoe Saldana, Lady Gaga, Dita Von Teese, Léa Seydoux and Bérénice Bejo, will unveil the 12-piece line in tandem with his pre-fall collection this month. Mabille will celebrate his decade in business with a party on Jan. 26 during Paris Couture Week.

Priced from 800 euros to 6,000 euros, or $950 to $7,100, the new eveningwear line will feature many of the label’s trademark masculine-feminine touches, including Mabille’s signature bows, tuxedo dresses and shirting details.

“We are aiming it primarily at American customers because over there, demand is strong and we dress a lot of celebrities. There is a real red-carpet feel to this collection, and at the same time, it’s a comfortable collection,” the designer said.

Mabille explained he had previously avoided designing ready-to-wear evening gowns, as he did not want to create any overlap with his couture creations, but this strategy had left some clients confused.

“We have a strong couture image internationally, and it was sometimes frustrating for customers not to find cocktail dresses or evening gowns in stores,” he noted. “In some markets, women are not yet ready to wait two-and-a-half to three months for their [custom-made] dress. They want their dress now.”

He hopes the line will be carried in eight to 15 points of sale in its first season. Retailers will be able to customize elements of the collection, such as the choice of material, to their clientele’s tastes, Mabille added.

The line, due to be delivered to stores from late June, aims to build each season on timeless staples, but will remain aesthetically distinct from the couture collection.

Mabille, who has one directly operated store in Paris, is also looking to expand his retail presence with plans for shop-in-shops in Asia and additional standalone units in the United Kingdom and Los Angeles. The designer, who owns and runs the house with his family, said the label was well positioned after its first decade.

“Even if the retail environment is a bit difficult right now, we are lucky to be doing well, so that is very, very positive and obviously exciting. Couture is thriving, we are even a little overwhelmed. It’s great for us to be able to say that we are here, and here for a long time yet,” he said.