The brand added a store on Beverly Drive in Beverly Hills to a retail portfolio that includes units in Los Angeles, San Francisco and Malibu. 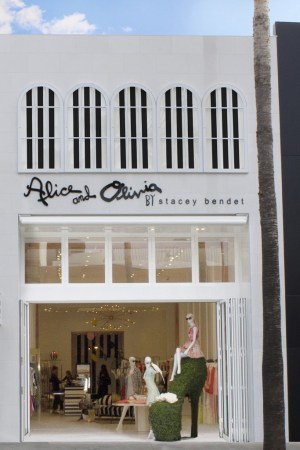 GROWTH MODE: Alice + Olivia is going big bi-coastally. In California, the brand added a store on Beverly Drive in Beverly Hills to a retail portfolio that includes units on Robertson Boulevard in Los Angeles, on Fillmore Street in San Francisco and at the Malibu Lumber Yard in Malibu. The new Beverly Drive store’s façade was made to look like a dollhouse with arched windows at the top and foldable doors that keep the store open and airy throughout the day, according to Alice + Olivia designer Stacey Bendet.

Bendet’s four-year-old daughter Eloise Eisner contributed to the design of the store. One of her paintings is recreated on a large scale by the dressing rooms. “She kind of draws very abstractly. She did this amazing blue and peach and lime cool, abstract swirly painting,” said Bendet.

Alice + Olivia is not finished with retail in the L.A. area, and Bendet said the brand is likely to put a store on Melrose Avenue. Los Angeles’ expanse, she explained, makes it similar to New York, where “You can have a store uptown, downtown, Eastside, Westside.” Speaking of New York, Alice + Olivia is making its pop-up location in SoHo a permanent store and is next month introducing a store in East Hampton, where it flirted with the retail scene with a pop-up last year. In total, Alice + Olivia will have 12 stores come May. Outside of the U.S., where Alice + Olivia currently only has in-store shops, the brand is spreading retail as well. Bendet said she expects to have stores in Hong Kong, Tokyo and Dubai launched this year with a partner. “I’m not trying to roll out a million stores. We are doing it market by market where we reallyfeel there is an opportunity and a space that we really love,” said Bendet.