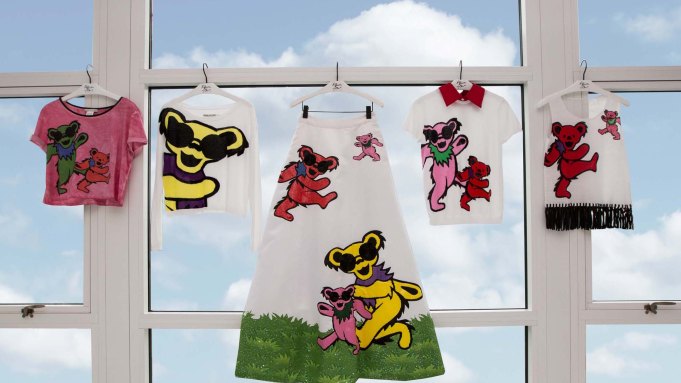 DEAD HEADS: Alice + Olivia’s latest capsule collection — a Grateful Dead-themed lineup of clothing, shoes and handbags — might seem out of left field for the contemporary brand. On the contrary, designer Stacey Bendet knows quite a bit about the legendary rock band thanks to her husband, Eric Eisner, who’s producing an as-of-yet untitled Grateful Dead documentary with Martin Scorsese and several others, with production slated to be finished this summer.

The Grateful Dead x Alice + Olivia capsule collection — her “secret” project for the past several months — was Bendet’s idea. “My husband [Eric] is a hugely passionate Dead fan, and his is the first film to have the entire band’s participation, with usage of their archived music and old footage,” Bendet explained. When she suggested designing a themed collection to coincide with the film’s release, her husband wasn’t so sure. But his mind changed after he went to the band’s 50th-anniversary concerts in Chicago. “Every girl came up to him saying how much they love Alice + Olivia, and I was like, ‘See! There’s crossover [with the fans!]’” Bendet said with a laugh.

Pulling inspiration from Grateful Dead memorabilia, Bendet reinterpreted the iconic dancing bear with a personal twist — the bears are all wearing oversize black sunglasses, her signature look. In colorful beading and embroidery, she rendered the bear motif on Ts, sweaters, tank tops and accessories, including slip-on sneakers with leather appliqués. Katy Perry recently wore a head-to-toe look from the collection out in Los Angeles.

Ranging from $165 to $1,298 for a ball-gown skirt, the capsule collection will be available at the brand’s retail stores across the U.S. and Asia as well as on aliceandolivia.com this April.