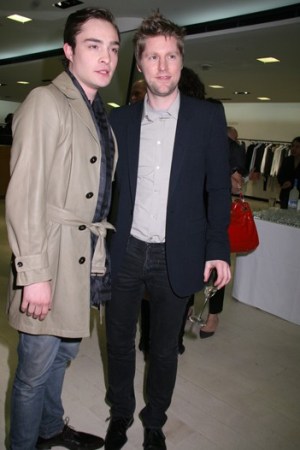 Cool Britannia ruled the cocktail party that Barneys New York and Ed Westwick of “Gossip Girl” hosted in honor — make that honour — of Burberry’s Christopher Bailey and the spring Prorsum collection for men.

“We don’t have ‘Gossip Girl’ at home, but Simon Doonan filled me in,” said Bailey, who came to New York for only a few hours, just for the event, before returning to London. If he’d hoped to squeeze a meal into the itinerary, he had to settle for the party’s British-themed canapés, including miniature shepherd’s pies and roast beef.

“I’m just really, really busy,” he explained. “We’ve got all the campaigns to shoot, and then the pre-collections.”

Bailey was delighted to see the breezy spring collection, widely considered one of his definitive efforts, in the store.

“It’s always exciting to see multiples of pieces; I’m not used to that,” he remarked.

Westwick was there on a quick break from shooting “Gossip Girl” “around the corner,” he said, and was happy to support a British icon such as Burberry.

“They’ve always had good things for me, and in recent years we’ve seen it tied in with the rock ’n’ roll thing, and I really like that,” he said. The English actor said he was looking forward to a vacation after the season wraps on April 1. “I don’t know where,” he said. “Where’s the sun?”

Westwick sported a Burberry trench, as did Mary-Kate Olsen, whose boyfriend Nate Lowman was working the turntables. She laughed off the media analysis that her polished appearance at the previous night’s Metropolitan Opera gala had incited.

“That’s why I’m doing the complete opposite now,” she said, cheerfully tugging at her more-typical casual layers, including a holey T-shirt.

“Now we’ve got to get all the girls paying full price again,” mused Doonan as he surveyed the room. “That’s our mission.”