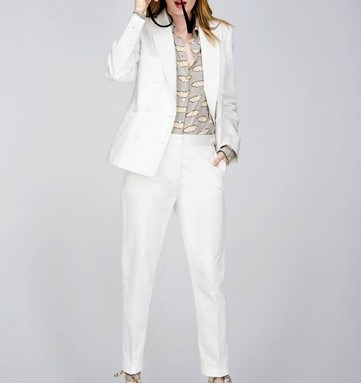 ALL STELLA, ALL THE TIME: Stella McCartney has a busy few days coming up. The designer will make a personal appearance in Manhattan today at Barneys New York on the same day her 23-piece exclusive collection for Net-a-Porter goes on sale worldwide. The collection includes a limited edition print by artist Peter Blake. McCartney then hops a plane and heads to Chicago for a personal appearance at the Barneys there on Wednesday.

KATE’S DEBUT: Kate Hudson made her directorial debut in “Cutlass,” a short film that was a part of Glamour’s “Reel Moments” movie series and screened on Sunday during the Tribeca Film Festival. But her move behind the camera was something that came naturally. “I grew up behind the camera,” said Hudson at the after party hosted by Glamour at the Greenwich Hotel. When her mother, Goldie Hawn, and Hawn’s longtime partner, Kurt Russell, starred in movies when Hudson was a little girl, “we couldn’t be on set unless we were working.”

For example, in “Big Trouble in Little China” which featured Russell, Hudson said she braided hair for the extras in the film. Still, the actress admitted directing “Cutlass” was challenging, particularly because the real story she adapted for the film reflected the glamorous brand message of the film series. Hudson said her own short would have reflected her raunchier sense of humor. “If it were mine, it would have been a differently rated type of short,” she said.

CHANEL’S DAY: The city of New York has declared today as Chanel No.5 Day and Saks Fifth Avenue is debuting the brand’s new TV campaign, with Audrey Tatou, on monitors placed in all 17 of the flagship’s display windows. Temporary street signs stand outside the store, renaming Fifth Avenue as Avenue No.5 for this week; a new 2.5-oz. size of Chanel No.5 Eau Premier, a recent interpretation of the fragrance, is being sold at Saks exclusively for $88 a bottle, and makeup artist events are being staged in the store to help customers achieve the red-lipped and other cinematic effects that Tatou sports in the Chanel commercial and in an upcoming biographic film.

The company zeroed in on May 5 because of the corporate folklore surrounding the naming of Chanel No.5. As the story goes, Madame Chanel received the fifth, and winning, submission from perfumer Ernest Beaux on the fifth day of the fifth month of the year.

SILK ROAD: Six years after shutting his signature label, Jean Colonna is making a fashion comeback. Once known for his tough, rock ’n’ roll looks, this time around the Belgium-born designer is taking a softer approach with a collection of simple tanks tops and T-shirts made from fine silks and cashmeres woven in Nepal. “It’s a totally new direction,” said Colonna of the line, via which he intends to flout fashion traditions. “I don’t want seasons, I don’t want to hold sales.” The collection, which he said would expand to include accessories and fragrances, will be sold mainly online at jeancolonna.com from September and also in pop-up boutiques. In June, a run of 300 pieces will go on sale, while 150 silk tops were handed out at this year’s Hyères festival. Prices will start at 90 euros, or $120 at current exchange, up to 300 euros, or $398. Since closing his brand after his fall-winter 2004 collection, Colonna has designed for Ramosport and collaborated with artists such as the late musician Alain Bashung.