Indie zines Atmos and Mess Magazine explore how to create new content ahead of Earth Day while Allbirds steps into carbon stickers.

This week in sustainability, there is a continued dialogue as to how indie magazines (with a climate bent) wrangle in logistics and carve new digital opportunities ahead of Earth Day. And while some brands look to dial back multipronged sustainability initiatives, footwear label Allbirds proceeds with carbon stickers.

CATALYZING CLIMATE AND CULTURE : Three issues in, climate-themed independent magazine Atmos has already been all over the place — be it exploring space archaeology, rallying attention to climate change with digital climate strikes or detailing global fashion.

The third issue released today titled Flourish/Collapse walks the line “between expansion and collapse, and never has it been more clearly illuminated how thin that line is,” said editor in chief William Defebaugh, in a statement.

While independent magazines and traditional media companies alike are rocked by the pandemic, the small team behind Atmos is trying to keep nimble.

MAKING THE MOST OF MESS: In another situation, editor in chief of indie fashion publication Mess Magazine Domi Perek shared how her team aims to mitigate logistical strains and greenwashing ahead of Earth Day while keeping it real.

Usually produced en masse in China, Mess Magazine was forced to order smaller runs of print copies in Europe — at a steeper cost — only to become stacks mostly sequestered inside a staff member’s apartment with magazine boutiques closed.

But the magazine has embraced a more transparent relationship with its web site, contributors and Instagram content in the meantime.

“We started to reach out also to other people and gather new creatives to our community, by creating Instagram Live series, called “What a Mess,” where we invite industry professionals to talk about their ways of coping with the current situation — aka mess,” said Perek. The magazine is partnering with Global Fashion Exchange for the series.

“I feel like a lot of companies, fashion designers and even influencers these days, will try to sell their ‘sustainable’ products, or worse, their new image to us,” said Perek, who is cautious of the latter especially in the month of April.

ALLBIRDS LAUNCHES CARBON NUMBERS: With carbon emissions as a “North Star” to the company known for its wool sneakers, Allbirds is expanding its mission sharing a number, for every product, that details the carbon impact throughout its lifecycle.

Carbon footprint numbers will be printed on the footbed of all Allbirds shoes, on shoe boxes and each product page online, as well as available for customers to check for in stores.

“The sad reality is there’s not a lot of data out there. Not everyone relies on the same methodologies,” said Joey Zwillinger, cofounder of Allbirds to WWD.

The company used initial data from the Higg Index on top of its own proprietary methods, drawing the “12.5” benchmark for the average sneaker from a 2013 study by MIT on the life-cycle assessment of footwear. In comparison, the average carbon number for Allbirds’ footwear is 7.6.

The carbon footprint initiative is what Zwillinger calls “the next chapter for us,” building upon the company becoming 100-percent carbon-neutral last Earth Day, possible by the additional purchasing of carbon offsets.

But as to whether the rest of the footwear industry will step to accurately report carbon numbers remains unknown, which is why the initiative could be at most right now — a vision.

“What we’re trying to do here is create a singular metric that everyone can adopt,” reiterated Zwillinger.

As for how the crisis has tested the digitally native company — also a certified B Corp — Allbirds will be following guidance by local governments, but as of now, its four China stores are the only ones open. As Zwillinger shared, Allbirds will continue to provide compensation for its employees until July 31. 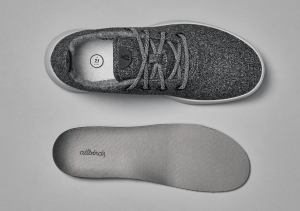