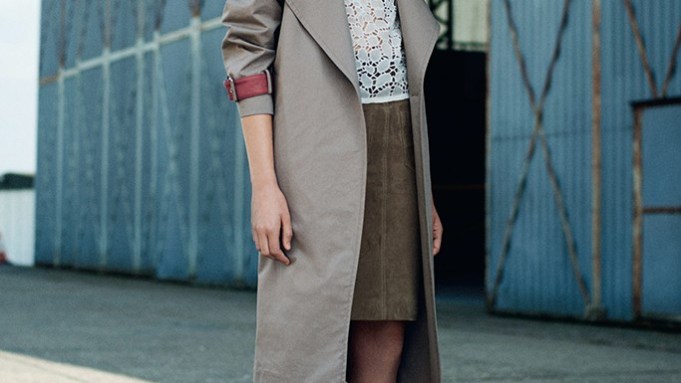 AIR TIME: London-based label AllSaints is eschewing a traditional presentation for the spring-summer 2015 season, in favor of unveiling its men’s and women’s collections to the media digitally. The collections will later appear on AllSaints’ social media channels and Web site.

For the past two seasons, the label has paraded its collections in New York, which Wil Beedle, AllSaints’ creative director, said was intended to demonstrate the brand’s “regeneration.”

Beedle noted that he sees the label sharing its collection online as a “global experience,” given the brand has recently expanded in locales including South Korea, the U.S., Canada and the Netherlands.

The collection nods to the ideas of movement and flight. Among the women’s looks are an anthracite silk flying suit in a white digital feather print; a voluminous trench coat in dark blue chambray; and a short-sleeved biker jacket that’s crafted in punched, lace-effect leather. Men’s designs include Hawaiian shirts in a moody, black and white print and pony skin sandals done in a tie-dye camouflage print.

To further underline the idea of flight, the looks were shot on a runway — of the aviation, rather than fashion persuasion.