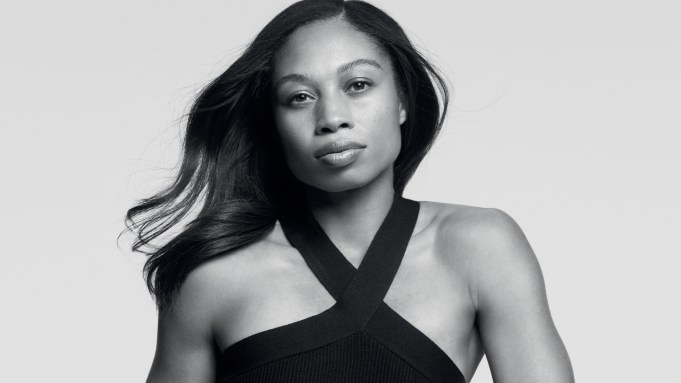 Allyson Felix got glammed up for her latest campaign with Omega.

This week, the five-time Olympian starred in a video for the Swiss luxury watch company wearing a black long-sleeve gown with a plunging neckline as she sported the De Ville Trésor in Moonshine Gold with malachite dial by Omega.

“I’m not one for standing still,” the post was captioned on Twitter, quoting the Felix in the video.

The clip also depicts her smiling as the camera pans to different angles of her standing and showing her watch. It concludes with her taking off and running in her dress as she would in a race.

“I’m not one for standing still.” @AllysonFelix – wearing the De Ville Trésor in Moonshine™ Gold with malachite dial. https://t.co/Ak8xOpCBtW#OMEGAMyChoice pic.twitter.com/Ti5DH7UMUL

Last month, the former track and field athlete was tapped to become an official ambassador for Omega, joining other Olympians such as Michael Phelps, Caeleb Dressel, Noah Lyles, Shaun White and Dalilah Muhammad, among others. Omega has been the official timekeeper for the Olympic Games since 1932.

“Omega has been there as a timekeeper throughout my athletics career. It’s been an honor to rely on their precision for some of my fastest moments and I’m thrilled to wear their watches as a symbol of the brand’s quality,” Felix said.

Felix first appeared in the 2004 Olympics in Athens, Greece, where she won the silver medal in the women’s 200-meter race. She has continued to medal in each Olympic Games thereafter, accruing a total of 11 Olympic medals, seven of them gold. Felix is the most decorated female athlete in track and field history.

“Allyson represents the exact dedication and talent it takes to reach the top,” said Raynald Aeschlimann, president and chief executive officer of Omega. “She’s an inspiration to any young athlete, and I’m so glad we will now be working so closely together.”