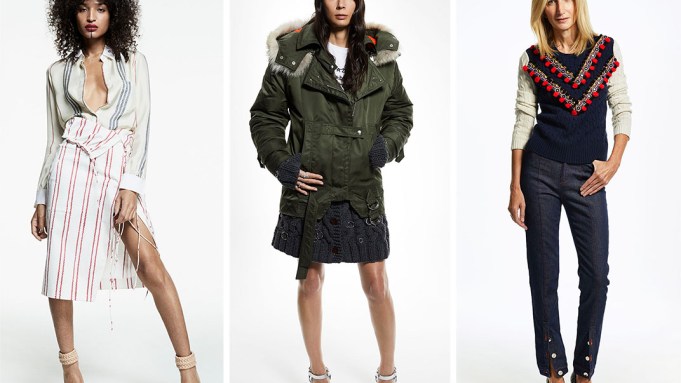 Joseph Altuzarra is acknowledging his 10th anniversary in business with a limited-edition capsule collection called “The One That Got Away.”

The pieces were selected by 10 of Altuzarra’s closest friends and collaborators: Carine Roitfeld, Carolina Issa, Cindi Leive, Evan Rachel Wood, Indya Moore, Jenna Lyons, Melanie Huynh, Sarah Rutson, Shu Pei Qin, and Vanessa Traina. Each were asked to select a piece from a past collection they wish they had gotten, but didn’t have the chance to.

The capsule consists of 12 ready-to-wear pieces and three accessories pieces, and will be sold exclusively at Barneys New York, Joyce (Hong Kong), Joseph (London) and Mytheresa.com, as well as on altuzarra.com this month.

Accessories such as earnings in silver for $395, multicolored printed pump for $695, and espadrille tote (small is $795, and the large is $995) round out the offerings.

“All of the women we invited to collaborate for this project embody the Altuzarra woman. They are sexy, they are confident, they are strong, and they are powerful. This has been such a special project for me, because it gave me the opportunity to look back at the last 10 years through the eyes of 10 of my closest friends and muses,” he said.

As reported Monday, Altuzarra soft-launched e-commerce last month and plans to open a pop-up store in February in New York. The store will open at 956 Madison Avenue in the space that formerly housed Tomas Maier.

Kering acquired a minority stake in Altuzarra’s business in 2013, providing resources for infrastructure and expertise in luxury rtw and accessories development. The company remains controlled by Altuzarra and his family.