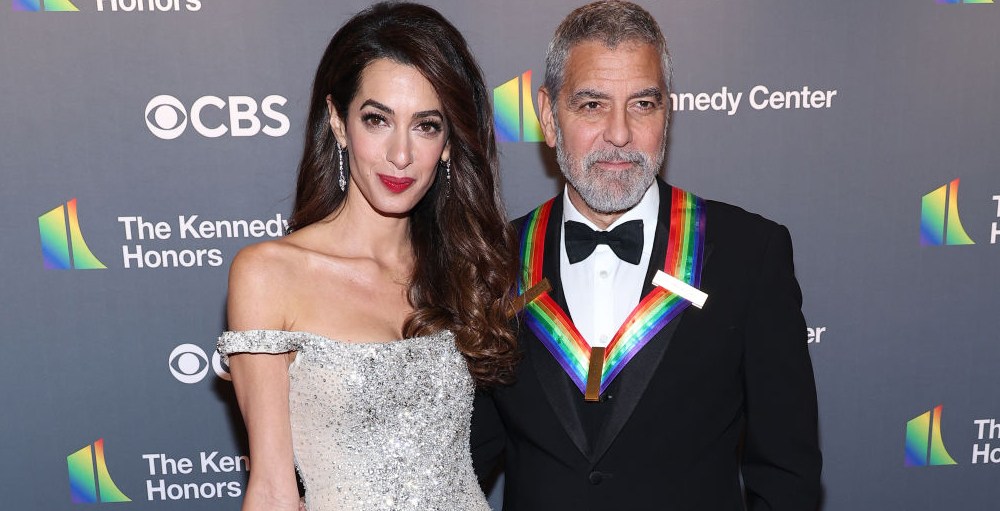 For the occasion, the lawyer, human rights activist and wife to George Clooney complemented the look with a pair of silver pointed-toe shoes and a matching clutch. She finished the look accessorizing with a silver and clear gemstone bracelet and dangling statement earrings.

For makeup, Amal sported an evening-ready look, featuring ruby red lipstick, blush, heavy mascara and shimmering eye shadow. For hair, she had it parted to one side and done in voluminous curls.

George wore a three-piece tuxedo with a white shirt and black bow tie. The actor was one of this year’s honorees. His most notable accessory was the rainbow ribbon given to all Kennedy Center honorees. The rainbow ribbon represents a “spectrum of skills within the performing arts,” according to Ivan Chermayeff, who created the design for the ribbon.

In addition to becoming a Kennedy Center honoree, George is also fronting the new campaign for the Omega Speedmaster ’57. George stars alongside South Korean actor Hyun Bin in the campaign celebrating the brand’s 65th anniversary.

The annual Kennedy Center Honors celebrate creatives who have made an impact on the American cultural landscape. This year’s honorees included George Clooney, Tania León, U2, Amy Grant and Gladys Knight. This year marks the 45th annual event, with CBS planning to broadcast the ceremony on Dec. 28.