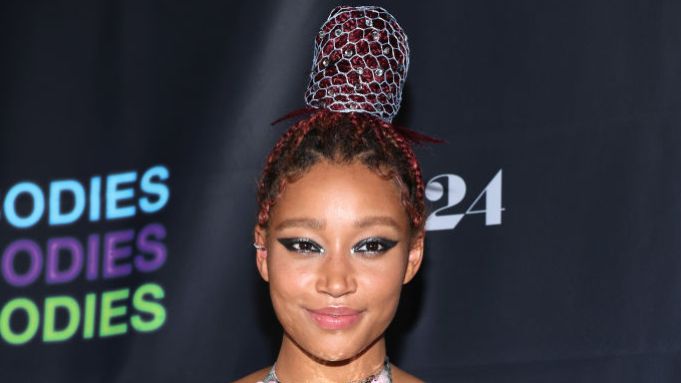 Stenberg paired the look with Chanel fine jewelry, including a bracelet, earrings and rings in 18-karat white gold with diamonds, and with a black thin Chanel belt and black Chanel heels.

Stenberg posed on the red carpet alongside their costars Maria Bakalova, Chase Sui Wonders, Rachel Sennott and others.

The actress wasn’t the only celebrity to have a standout fashion moment on the red carpet. Bakalova also made an impression with her look, wearing a black lace minidress from Saint Laurent. Wonders also went the high-fashion route, wearing black jacket and matching miniskirt with a sheer black shirt from Miu Miu’s fall 2022 ready-to-wear collection.

“Bodies Bodies Bodies” tells the story of a group of rich twentysomething friends who plan a hurricane party at a remote mansion, which quickly turns deadly. The film hits theaters on Friday.

This is the latest project Stenberg has been in. Previously they starred in the film version of the “Dear Evan Hansen” musical and was recently unveiled to be starring in the new Disney+ “Star Wars” series, “The Acolyte.”