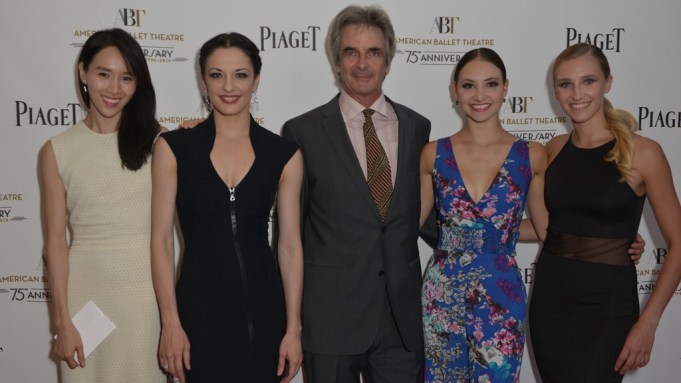 The 53,000-square-foot home was the setting for the seated 200-person-plus al fresco dinner and performance, which took place on a stage constructed on the tennis court.

The event, which raised over $250,000 for ABT, was a balmy one, but guests including Irena Medavoy, Florence Sloan, Wendy Goldberg, Cameron Silver and Sutton Stracke didn’t seem to mind, as being nose-to-nose with ABT principals dancers Veronika Part, Hee Seo and Cory Stearns, plus soloists Alexandre Hammoudi, Christine Shevchenko and Devon Teusche as they performed four dances was considered a treat in itself. After quick showers and wardrobe changes, the natty dancers joined guests for dinner.

“It’s not the hottest place we’ve ever danced, but it’s close,” said Part, who is currently on the lookout for a new partner who can match her five-foot-eight-inch frame. “I might know someone for you, let me text him now,” Silver told her. Part was also sporting some serious (borrowed) bling from event sponsor Piaget. The Swiss watch brand is prepping for events in New York and Beverly Hills Oct. 7 and 9 respectively, to unveil new stores, and was eager to start its efforts with the town’s heavy hitters.

ABT artistic director Kevin McKenzie called Beverly Hills “a nice familiar place to be. Ironically with so much attention, we become more of an international touring company, so it’s nice to perform in other U.S. cities when we can.” Of the heat, he related that it wasn’t the blazing stage lights or even the flop sweat that were the biggest dangers, but the condensation that form on the dance floor surface.

“We’ve had some close calls,” he said. Hammoudi, who indulged himself at the dessert buffet set up back inside the house, was more candid. “There have definitely been some major wipeouts. Google ‘Greatest Ballet Falls’ and check out the 14-minute video made by other dancers. It’s pretty epic.”