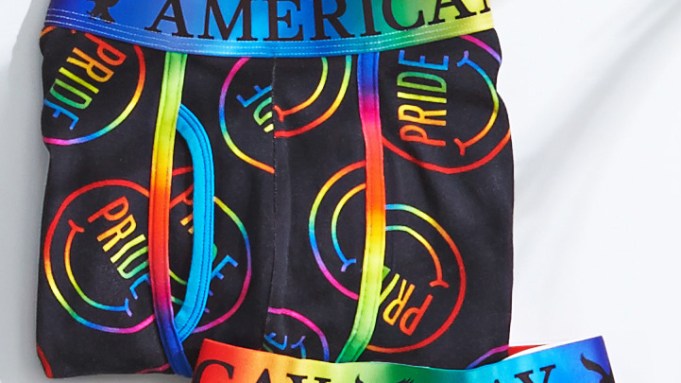 FEELING THE PRIDE: American Eagle Outfitters will offer limited-edition AEO Pride T-shirts, tanks, boxer briefs and accessories with 100 percent of sales benefiting It Gets Better Project, a nonprofit organization focused on communicating to lesbian, gay, bisexual and transgender youth around the world that it gets better.

The campaign began today at ae.com and in select stores in the U.S., Canada and Israel and will run through the end of the month, while supplies lasts.

AEO will promote the partnership through social media, customer e-mails and in-store marketing and will encourage customers to take the It Gets Better Pledge and upload their own video at Itgetsbetter.org.

In Pittsburgh, home of AEO’s global headquarters, the company will sponsor Pride Pittsburgh by enabling associates to attend the Pride in the Streets concert and participate in the Pittsburgh Equality March on June 11.

In 24 select AEO stores, customers are invited to share their pride by taking photos in front of the Pride banner and have their photos uploaded to the company’s Times Square billboards on June 25, during the NYC Pride March. Also in New York, AEO associates will host a #WeAllCan float in the NYC Pride March on June 25 and customers’ photos will be shared on video screens.

Further, AEO is supporting its first LGBTQ film award in partnership with NewFest. The New Voices Filmmaker Grant will be awarded to a young emerging LBGTQ filmmaker during NYC Pride’s OutCinema on June 19.