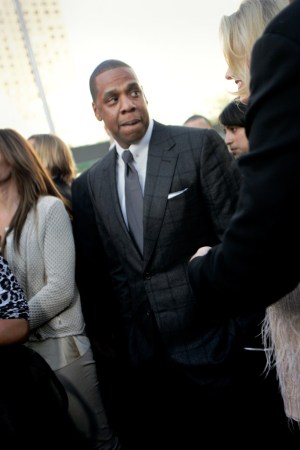 AN ODE TO TOM: Jay-Z has penned an ode to Tom Ford in the form of a song on his new album, “Magna Carta Holy Grail,” which was released this week. The song, called “Tom Ford,” includes the lyrics “I don’t pop Molly, I rock Tom Ford”. The “Molly” in question is a reference to MDMA, a pure form of Ecstasy.

“Who would not be flattered to have an entire Jay-Z track named after them? I mean, come on, it’s pretty rare that something like that happens,” Ford told WWD. “It’s a kind of validation of one’s work, as it means that one has really penetrated and made an impact on popular culture. My favorite line is ‘I don’t pop Molly, I rock Tom Ford.’ I love that he gets a ‘high’ from my clothes. I have been dressing him for years now, and I have to say I think he looks great in my clothes. [He] is one of our biggest customers. He let me know about this quite a while ago.”

Ford was also name-dropped in January by Justin Timberlake, who mentioned him in his song “Suit & Tie” featuring Jay-Z, singing, “Tom Ford tuxedos for no reason.” Timberlake also wore Tom Ford designs in the video for the song and on the album itself.