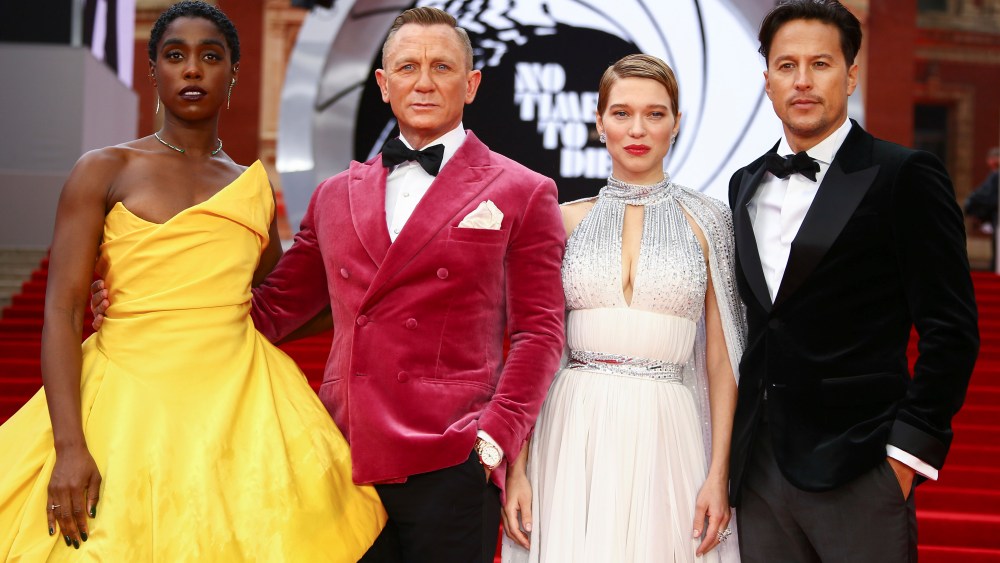 It seemed everyone turned heads on the red carpet of the ‘No Time to Die’ premiere.

On Tuesday, the latest “James Bond” movie held a premiere in London, where it saw the likes of its stars such as Daniel Craig, Ana de Armas, Léa Seydoux, Lashana Lynch, Naomie Harris, Ben Whishaw and Rami Malek walking the red carpet.

“No Time to Die” marks the 25th movie in the “James Bond” franchise, and also Craig’s fifth time playing James Bond. According to Craig, this marks his last “Bond” film.

De Armas and Seydoux both stunned in custom Louis Vuitton creations. Seydoux wore an ivory silk cape gown embroidered with silver paillettes and crystals, paired with sandals. She finished off the look with a clean pixie hairstyle and a bold red lip. De Armas wore a black velvet dress with a plunging neckline, thigh-high slit and straps embroidered with crystals and silver paillettes, as well as custom sandals. Her hair was in a short bob with bangs and she opted for a more natural makeup look.

Lynch looked glamorous in a strapless, bright yellow Vivienne Westwood couture gown featuring a black underlay peeking at the bottom. She topped off the look with a simple jeweled choker. Harris wore a white sequined gown by Michael Kors Collection featuring a cutout design on her midriff, an Omega watch and wore an Ana Khouri  jeweled headpiece over her hair.

The royal family also made a special appearance at the movie premiere with Prince Charles; the Duchess of Cornwall, Camilla Parker Bowles; Prince William, and the Duchess of Cambridge, Kate Middleton, walking the red carpet. For the occasion, Middleton dazzled in a gold sequined Jenny Packham gown.

The Prince of Wales and Duchess of Cornwall have arrived with the Duke and Duchess of Cambridge at the Royal Albert Hall for the world premiere of Daniel Craig’s last outing as James Bond in #NoTimeToDie pic.twitter.com/Hp78VKGqQ8

Craig wore a dark pink velour suit jacket finished with a bowtie and watch by Omega, while Malek kept it simple with a Prada black wool and mohair tuxedo featuring a shawl lapel, a white stretch poplin tuxedo shirt and a black satin bow-tie.

Cary Joji Fukunaga, the film’s director, also kept it simple — but sharp — in a velour black tuxedo suit with dark gray dress pants and black-and-white loafers. Phoebe Waller-Bridge, who was one of the film’s screenwriters, wore a black sequined Azzaro jumpsuit with a beige-colored cape.

Click through the above gallery to see celebrities at the “No Time to Die” premiere.