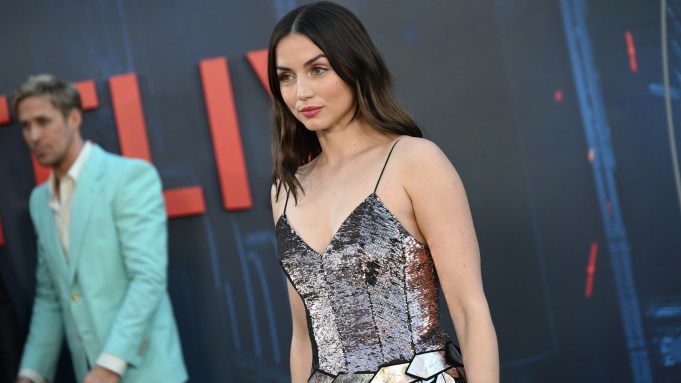 Ana de Armas stunned at the premiere of her latest movie, “The Gray Man.”

On Wednesday, the actress walked on the red carpet of the TCL Chinese Theatre in Los Angeles in a custom look by Louis Vuitton, which was a fully embroidered rose gold mini-paillette straight cut gown with a gladiator layered skirt. She styled her brown hair in loose locks and wore pink-accented makeup.

She was styled by Samantha McMillen, who also works with Elle Fanning, Brie Larson and Kate Bosworth. The actress works with the French luxury fashion house frequently, attending its shows and wearing its creations to other high-scale events such as the premiere of the latest James Bond movie “No Time to Die” in October.

Her costars from the movie also joined her on the red carpet, including Ryan Gosling (fresh off dying his hair bleach blond for his upcoming “Barbie” movie), Chris Evans, Regé-Jean Page, Julia Butters, Alfre Woodard and Billy Bob Thornton.

This marks de Armas’ second time starring in a movie with Gosling. The two starred in the 2017 movie “Blade Runner 2049,” which was a sequel to the original movie from 1982. This is also her second movie with Evans, both of whom garnered critical acclaim after their 2019 murder mystery movie “Knives Out.”

In September, her anticipated movie “Blonde,” in which she takes on the challenging role of Marilyn Monroe in a fictionalized take of the icon’s life, will also be released on Netflix.

The action thriller movie follows a CIA agent, played by Gosling, who is hunted across the globe by a sociopathic rogue operative, played by Evans, after he uncovers the damning secrets about the agency.

The film is set for a limited theatrical release on July 15 but will be available to stream on Netflix starting July 22. According to Deadline, it is the most expensive movie ever made by Netflix, with a budget of $200 million.