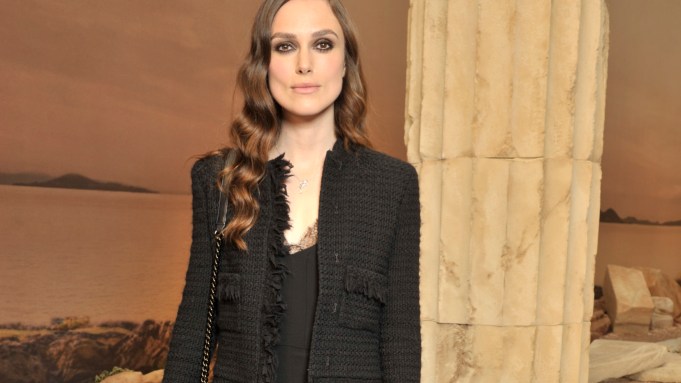 “That would be nice, but it’s not the case,” said the British actress, who declined to comment on rumors she would reprise her role as Elizabeth Swann in the next installment of the “Pirates of the Caribbean” franchise.

Next Monday, Knightley starts rehearsals for a biopic of French author Colette, directed by Wash Westmoreland. “It covers her first marriage with Willy, who was the guy who took credit for her first four novels. It’s about that relationship and the demise of that relationship,” she explained.

To follow, she said, perhaps a holiday will finally be in order since she has been working nonstop since September. “Hopefully, it’ll look a little bit like today’s show,” said Knightley, who appears in ads for Chanel fragrances and fine jewelry.

Pedro Almodóvar, Isabelle Huppert and Charlotte Casiraghi were also among the 800 guests spread over two shows, set in a replica of the Temple of Poseidon that Chanel designer Karl Lagerfeld had erected in the Galerie Courbe at the Grand Palais,

Almodóvar had another seaside destination in mind – Cannes, where he will preside over the jury of the film festival later this month. “Today was the last fitting,” he said. “Now I have a different suit for every day. In my life, I’ve never had so many things to wear.”

“The one that fits me well is the more uncomfortable one,” he added, declining to reveal designers. On a more serious note, the Spanish director said the most important part of his role was “to be open and rested” — in order to remain focused through as many as three features a day.

“I’m very curious about many of the movies. I hope that there will be a masterpiece,” he said.

Caroline de Maigret, meanwhile, felt right at home. “I have this special thing about Greece because that’s where I go every summer,” said the model and music producer. “I felt already on holiday in a way.”

A boat trip, however, is not in the cards. “I’m a cruise girl, in the fashion sense. [Otherwise], I’m not a cruise girl at all. I have a son and a husband that are seasick, so that’s been the drama of my life,” she laughed.

As well as being an ambassador for Chanel, most recently appearing in an ad for the house’s new Gabrielle bag, de Maigret has also been working behind the scenes, creating the online CDM Diary style channel in partnership with the brand.

“It’s a different way of talking to people,” she said. “It’s interesting to see a collection through a woman who’s actually going to wear the clothes. I am my own billboard.”

As guests filtered out of the Grand Palais venue after the lunchtime show, a few couldn’t resist touching the impressive columns created for the occasion to see what they were really made from.

SEE ALSO: All The Looks From The Chanel Cruise 2018 Show in Paris >>

One warned a friend, “Be careful, I just put my heel through that rock, it’s polystyrene.”

For British actress Ellie Bamber, it was the gravel underfoot that clinched the realism of the set design.

“The stones are a great touch because it just feels like you’re walking in Greece,” she said. Her recent travels have taken her further afield, however.

“I like Asia, I’ve been traveling there,” said Bamber, who has three movies in post-production for release late this year and early next. Working on “Taipei,” due out at the end of the year, took her to the Taiwanese capital, she explained. “I loved it, it’s such a beautiful city.”

Chanel Cruise 2018: Greece is the Word