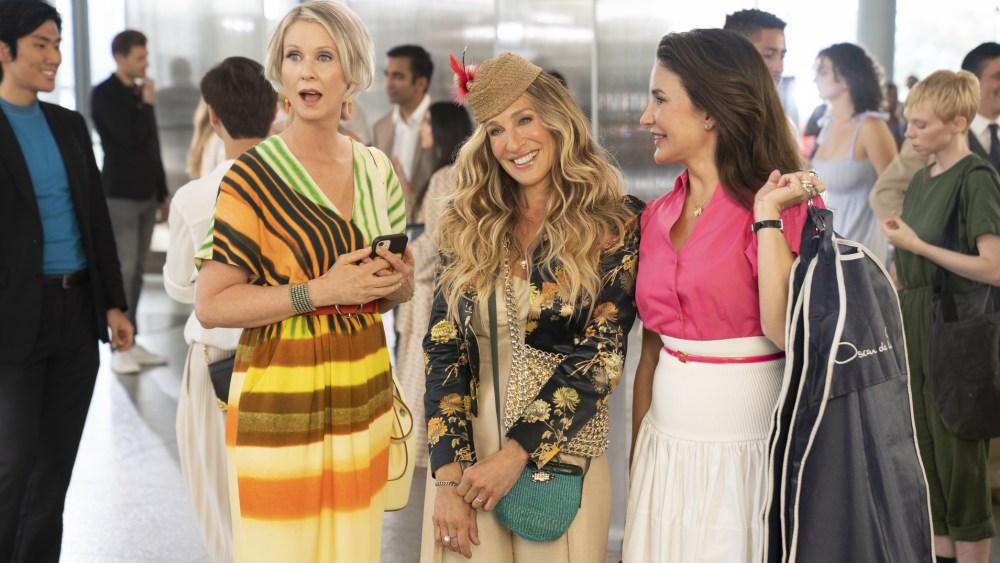 “Sex and the City” reboot “And Just Like That” debuted on HBO Max on Thursday, bringing back the high-fashion factor that the series was known for.

HBO Max dropped the first two episodes of the reboot today, with series regulars Carrie Bradshaw, Miranda Hobbes and Charlotte York — played by Sarah Jessica Parker, Cynthia Nixon and Kristin Davis, respectively — both referencing their much revered styles, while also playing with more modern pieces. The reboot follows the three women, plus a mix of new and returning characters, as they navigate friendship, family and their love lives in their 50s.

“What we brought in new was just updating it. Making it more modern. Working with new designers, new young designers, internationally,” said Danny Santiago, one of the reboot’s costume designers, in an interview with WWD. “Because of Instagram, we were able to find all these new people that we could bring in. But again, sticking to what the girls had already as far as their types of looks.”

She later went for a simpler look for York’s daughter Lily’s piano recital, wearing an oversize blazer over a white blouse and loose-fitting silk knee-length trousers. One of the first nods to the original series and its films, the character paired the outfit with her “wedding shoes,” which are the blue satin jewel buckle Manolo Blahnik Hangisi pumps that Bradshaw wore in the first “Sex and the City” movie when marrying Mr. Big.

York’s style in the reboot follows the conservative and classy aesthetic she was known for in the original “Sex and the City” series, but this time used her fashion to give a nod to her two daughters, Rose and Lily. She starts the episode wearing a rose detailed shirt from Go Silk with a white midi-length skirt by Alexander McQueen, pairing it with a matching hot pink Louis Vuitton Capucines PM bag, one of the many bags she wears from the designer brand throughout the show.

Perhaps the character with the most different style from the original series, Hobbes forgoes her usual black business suits for more colorful and relaxed options in the reboot. Hobbes’ outfits exude a Bohemian aesthetic, first with a multicolored Dries Van Noten dress at brunch and then with a silk tie-dye blouse and matching skirt from Gerard Darel at the piano recital.

Pantone’s color of 2022, Very Peri — which was announced on Wednesday — also made an appearance in the reboot. Late actor Willie Garson, who plays fan-favorite character Stanford Blatch, wore the hue in a Paul Smith suit for the piano recital. Garson passed away amid filming in September at the age of 57 after a battle with cancer.

She made her debut in the first episode wearing a printed jumpsuit by Issey Miyake with a black-and-white coat from The Row paired with paint-splatter-designed heels by Giuseppe Zanotti and oversize jewelry from brands like Monies, Rianna + Nina and Ana Srdic.

With the rest of the season still ahead, it’s expected that more “Sex and the City” fashion Easter eggs will pop up in the reboot, as well as more standout fashion moments among all of the cast.