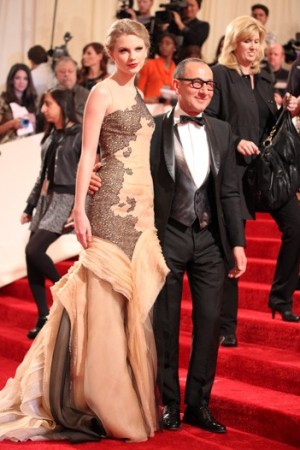 AND THE WINNER IS: J.Mendel will be this year’s fashion design award winner at the 12th annual National Design Awards of The Smithsonian’s Cooper-Hewitt National Design Museum in New York. Gilles Mendel’s designs for J. Mendel beat out Prabal Gurung and Jason Wu, and he will pick up the award at a dinner at Pier 60 on Oct. 20.

Mendel is just one of several designers and design firms being honored this year. Others include Knoll for corporate and institutional achievement; Continuum for product design; Shelton, Mindel & Associates for interior design, and Matthew Carter for lifetime achievement.

HIGH TIMES: It looks like Azzedine Alaïa will make one of his rare appearances during high-fashion week in Paris. The designer said Thursday he plans to show designs he described as “semicouture” some time during couture week, which runs from July 4 to 8.

NEW MAN: Benetton has tapped You Nguyen as chief merchandising officer and creative director of United Colors of Benetton. The first collection under Nguyen’s imprint will bow for fall-winter 2012. Nguyen was previously senior vice president of women’s merchandising and design at Levi’s.

A NEW DUO FOR CHLOE: Coty Prestige will reveal today that it has signed European actresses Imogen Poots and Camille Rowe-Pourcheresse to be the new faces of the Chloé fragrance advertising campaign, which will begin running worldwide in September. “With this new Chloé campaign, we wanted to pursue the story of the multifaceted Chloé woman,” said Françoise Mariez, senior vice president of marketing for European fragrances at Coty Prestige. “Both of the faces we have chosen represent this woman in their own way: Imogen embodies her fresh and natural facet and Camille incarnates her sensual and modern side.”

DOCTOR GRANOFF: Jill Granoff, former chief executive officer of Kenneth Cole Productions Inc., whose résumé includes top jobs at Victoria’s Secret Beauty, Liz Claiborne Inc. and the Estée Lauder Cos. Inc., told graduates at LIM College’s 72nd annual commencement exercises at Avery Fisher Hall Thursday to take responsibility for their futures. “First and foremost, you are in charge of your own destiny — you have to believe in the power of your dreams and make things happen. Don’t be one of those people who watch things happen. Make things happen! Remember, your values drive your behaviors which drive your results,” Granoff told the 330 undergraduates and 38 M.B.A. graduates who received degrees.

A Duke and Columbia Business School grad, Granoff offered insight into her success and spoke about the lessons she’s learned along the way. “One thing I’ve become famous for — both with my kids and at work — is my strong belief that you need to focus on the solution, not the problem. It certainly helps that my blood type is B positive (really it is), but we can all benefit by positive thinking,” she said. Granoff was presented with LIM College’s Distinguished Achievement Award and an honorary Doctor of Commercial Science degree at the ceremony.