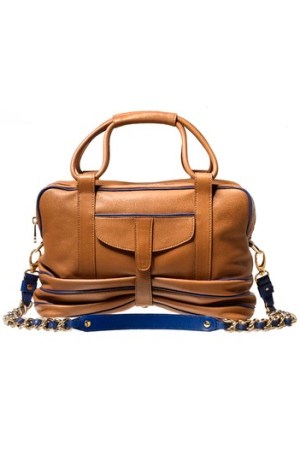 AND THE WINNERS ARE…: Judges sifted through more than 1,200 submissions to crown eight lucky winners of the fifth annual Independent Handbag Designer Awards held Thursday at the Time & Life Building in New York.

Prizes included receiving a booth at WWDMAGIC and the opportunity to develop a capsule collection for Saks Fifth Avenue for Best Handbag in Overall Style and Design, and the chance to create a limited edition collection for Isabella Fiore for the winner of the Artisan House Award.

MODEL BOOK: Call it David Gandy day. Domenico Dolce and Stefano Gabbana are feting their longtime muse-friend-ad campaign model with a book called “David Gandy by Dolce & Gabbana” and with a flurry of activities. On June 18, the British model will be at the designers’ men’s wear show, he will speed around, Dolce Vita style, in a black Triumph; meet fans at La Rinascente to promote the Light Blue fragrance; sign limited edition T-shirts splashed with his portrait in the Dolce & Gabbana women’s shop and, lastly, join the designers at the launch party for the book published by Rizzoli in their men’s wear boutique.

KATE MOSS CREATES BEAUTY LINE WITH RIMMEL: Building on her role as one of the ambassadors for Coty Inc.’s Rimmel makeup brand, Kate Moss is now creating her own line for the label.

A spokeswoman for Rimmel confirmed Thursday that Rimmel London is collaborating with Moss on a makeup range, in response to reports about the line that surfaced on blogs Wednesday. The spokeswoman said that the products and packaging are “still in the final stages of production,” but noted that the line is due to hit U.K. stores in September. Coty Inc. also holds the license for Kate Moss’ fragrances.

NO VACANCIES: Hotelier Vikram Chatwal’s much awaited Dream Downtown held its grand opening on Wednesday night, officially opening its doors in Chelsea with a well-attended bash that stretched from the lobby, to the second floor “beach club” and pool to the rooftop lounge, PH-D. Stavros Niarchos, Kellan Lutz, Justin Bartha and Shenae Grimes were among those who turned out to check out the Vegas-style space, as were a crew of ladies who had just came from the Bent on Learning benefit at the Urban Zen Center. Krysten Ritter, Kelly Rutherford, Taraji P. Henson, Stacey Bendet, Tika Sumpter and Sanaa Lathan all used the Dream bash as a sort of after party.

“When I heard there was a party after the charity event, I was like let’s do it,” Lathan said from a rooftop booth. “We’re dressed and ready to go. I got all my girls here.”

Leonardo DiCaprio, with customary baseball cap pulled over his face, caused the night’s biggest stir. The actor retired to a semiprivate seat, where a literal mob of guests craned their necks to catch a peak. He left to similar fanfare after midnight, but was shortly replaced by Carmelo Anthony and Amar’e Stoudemire of the Knicks, who made a more gregarious entrance. Stoudemire also wore a baseball cap. It sat decidedly higher on his head than Leo’s.

ON THE BEATON TRACK: “Each one is produced by my kitchen cabinet,” said the proud publisher Prosper Assouline, thumbing through a copy of “Beaton: The Art of the Scrapbook” this week at Liberty in London. “We’re small, and we manage it all ourselves.” Guests including Rena Sindi, Amy Sacco and Nick Foulkes gathered at the new Assouline space at Liberty — in the former ground floor tearoom — to fete the new tome by James Danziger. François Delage, De Beers Diamond Jewelers’ chief executive officer, also swung by the event in anticipation of his own Assouline book launch to mark 10 years of the jewelry brand. “De Beers Jewelry,” an homage to diamond jewelry and contemporary art, will be unveiled next week at Phillips de Pury & Co. in London.

Assouline opened a cozy, 1,000-square-foot space at Liberty in April with wooden floors and portraits of Queen Elizabeth, Henry VIII and Queen Victoria. There’s a cafe offering homemade sodas, tea, coffee and Champagne. Alongside Assouline’s range of fashion, photography, and design titles, the space also carries a number of vintage books sourced by Assouline himself, as well as collaborations with luxury labels. These include a custom-made Goyard trunk, created to hold 100 Assouline books, and the leather-bound library case that Coach has made for Assouline.

GET THE PICTURE: Phillips de Pury & Co. christened its new 57th Street outpost with its first event last week, hosting the Photographers for Friends benefit, which raised more than $250,000 for the AIDS organization Friends in Deed. A slew of top photographers donated works that were auctioned off, including Annie Leibovitz, Bruce Weber, Steven Meisel, Marilyn Minter, Patrick Demarchelier, Edward Burtynsky, Jack Pierson and the estate of Robert Mapplethorpe.

X MARKS THE SPOT: Mugler’s creative director Nicola Formichetti, who helped whip up excitement for his men’s wear debut last January by having his buddy Lady Gaga produce the soundtrack, looks to be moving in a kinkier direction for his next men’s show, scheduled for Wednesday in Paris. He’s created a series of videos, an “uncensored” version of which he plans to put on porn video hosting site Xtube.com the day after the show. Hyperactive in the online world, Formichetti has already been posting photos from the shoot on his Twitter, Facebook and Tumblr pages, with additional teasers expected to drop in the days ahead of the show. Mugler’s new image maven tapped Brooklyn “Nu-disco” band Jessica 6 to provide an exclusive music mix, with its lead singer Nomi Ruiz making an appearance in the video.