The partnership includes a footwear and accessories line that will launch in mid-November.

What goes around comes around, just ask Anderson.Paak.

The three-time Grammy Award-winning artist, musician and producer has worked at a Vans retail store in Topanga Canyon, Calif., and performed on the brand’s House of Vans stage as part of its Sidestripe Sessions global music content series. Now AP, as he is known, has been named Vans’ first global music ambassador.

In this newly created role, the entertainer will serve as one of the judges for the Vans Musicians Wanted competition and is also working with the California-based company on an exclusive footwear and accessories collection.

The announcement of his new partnership with Vans comes on the same day he is releasing his latest single, “Jewelz,” which is accompanied by an animated music video featuring caricatures of AP and his son, Soul “Khlex” Rasheed in a satirical take on their real-life relationship. They are both wearing the Vans x Anderson.Paak footwear in the video which was directed by AP and Ali Graham.

“We are inspired by AP’s multifaceted creative talent and are excited to continue to partner with him throughout the next year for curated music and art initiatives, product design and enabling creativity within the local community and around the world,” said Tierney Stout, global music marketing lead at Vans, adding that “Anderson epitomizes creative expression.”

The Vans by Anderson .Paak collection is inspired by the entertainer’s Southern California roots and his albums, “Venice” and “Malibu.” There are two styles of footwear: the Old Skool DX silhouette inspired by AP’s debut album, “Venice,” which features a wavy, psychedelic upper, yellow eyelets and a translucent blue vinyl Sidestripe. The other model, Sid DX, pays homage to AP’s 2016 album, “Malibu,” and features an embroidered chenille pattern upper, tonal black laces and stitching, and a Flying-V logo embroidered at each side. Each style is finished with a custom tongue label message from AP along with translucent green waffle soles, custom packaging and dust bag matching back to the collection. 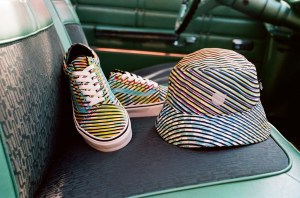 A look from the Vans x Anderson.Paak collaboration.  Sandy Kim

The collection, which will retail for $40 to $110, will be available worldwide beginning Nov. 13 at Vans retail stores and online as well as Foot Locker.

“I’m honored to be the newest member of the Vans Family and look forward to making history with one of the most respected global brands,” AP said. “I’m thankful for Vans’ partnership with .Paak House and can’t wait to broaden our reach to help even more people tap into their greatest potential.”

Born Brandon Paak Anderson in Oxnard, Calif., AP started out in the music business as Breezy Lovejoy before changing his moniker to Anderson .Paak. Over the years he has collaborated with everyone from Snoop Dogg to Chance the Rapper, and made his “Saturday Night Live” debut with Kendrick Lamar in 2018.