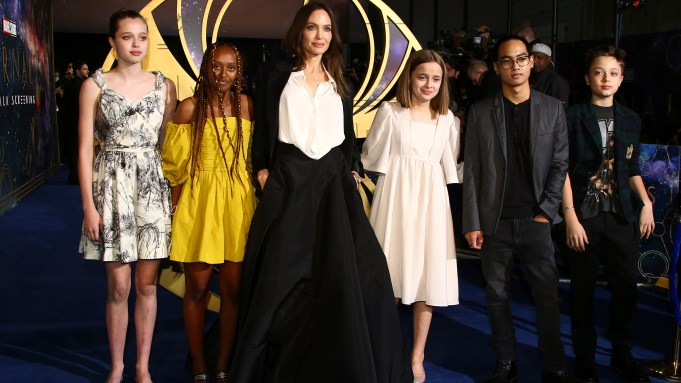 The cast members of “Eternals” continued their streak of fashion-forward red carpet style as they walked the red carpet of the movie’s U.K. premiere in London.

Angelina Jolie wore a custom look by Valentino, which featured a white blouse under a black blazer paired with a flowing black skirt. She was accompanied by her five children, Maddox, Shiloh, Vivienne, Knox and Zahara Jolie-Pitt, all of whom also attended the Rome and Los Angeles premieres of the movie in the last week.

Her children, with the exception of Zahara who dazzled in a yellow, ruched off-the-shoulder minidress, also fit their mother’s theme of a black-and-white palette. Shiloh opted for a simple, floral Dior dress (which was the same one her mother wore in 2019), while Vivienne wore a short-sleeved white structured midi dress. Maddox chose an all-black ensemble with a gray blazer while Knox wore black dress pants with a graphic T-shirt with the rock ‘n’ roll band Kiss emblazoned on it under a navy and dark green plaid blazer.

Gemma Chan, also attended, wearing an outfit by Zuhair Murad from the label’s fall 2021 couture collection. The two-piece set featured a black-and-white embellished ombré long-sleeved crop top with a hood and a matching sheer tulle skirt that was over a pair of high-waisted black underwear. Chan topped off the look with thigh-high black boots.

Salma Hayek walked the carpet in a custom red, sequined one-sleeved Saint Laurent dress that cinched at her waist. The actress posed for pictures with her 14-year-old daughter Valentina Pinault, whom she shares with her husband François-Henri Pinault.

Other stars that attended the premiere include Kumail Nanjiani, who wore an all-blue suit paired with shoes from Thursday Boots; Richard Madden, who wore a black-and-white suit, Kit Harington, who wore a suit an all-black suit by Fendi Men’s, and award-winning director Chloé Zhao, who wore a two-piece look from Chanel, which she previously wore at the “Eternals” premiere in L.A. last week.

“Eternals” is the 26th film in the Marvel Studios franchise, focusing on an immortal alien race called the Celestials who reunite to protect the universe from their evil counterparts. The film stars Jolie, Hayek, Chan, Nanjiani, Madden, Harington, Lia McHugh, Don Lee, Barry Keoghan and many others.

The movie is directed by Zhao, who recently won the Oscar Awards for Best Picture and Best Director for her movie “Nomadland.”

Click through the above gallery to see more photos from the “Eternals” London premiere.

The Standout Looks From the 2021 Rome Film Festival