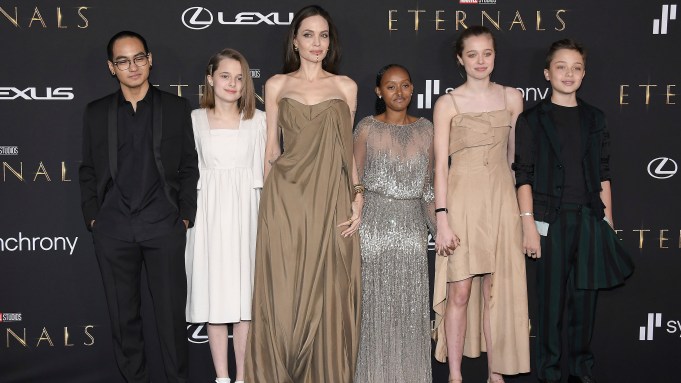 Jolie attended the premiere with children Maddox, Shiloh, Vivienne, Knox and Zahara Jolie-Pitt, with the family matching in monochromatic neutral-hued outfits. Zahara looked to her mother’s closet for the movie premiere, wearing the same Elie Saab silver fringe dress that Jolie wore to the 2014 Oscars. Shiloh also opted for one of Jolie’s outfits, wearing a beige-colored Gabriela Hearst dress the actress previously wore this summer.

The actress looked to Balmain for the “Eternals” film premiere, wearing a taupe-colored draped dress from the design house’s resort 2022 collection. Jolie paired the look with vintage Tiffany & Co. jewelry.

Other stars that attended the premiere include Kumail Nanjiani, who wore an Umar Sayeed Couture sherwani, Salma Hayek in a black Gucci dress and Oscar-winning director Chloé Zhao, who wore a two-piece look from Chanel.

“Eternals” is the 26th film in the Marvel Studios franchise, focusing on an immortal alien race called the Celestials who reunite to protect the universe from their evil counterparts. The film stars Jolie, Hayek, Chan, Nanjiani, Richard Madden, Kit Harington, Lia McHugh, Don Lee, Barry Keoghan and many others.

Click through the above gallery to see more photos from the “Eternals” Los Angeles premiere.