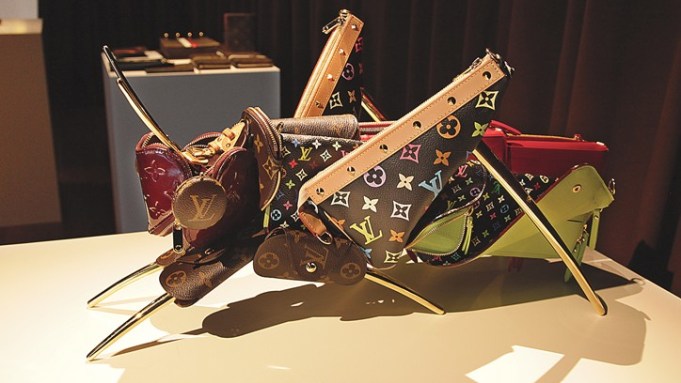 ANIMAL PLANET: Thanks to Billie Achilleos, a London-based self-described “versatile artist and maker of things,” fanatic collectors of all things Louis Vuitton may just have found a new use for their collections. The artist has been commissioned by Vuitton to create four beautiful “creatures” out of various “petite maroquinerie,” the French word for small leather goods. Wallets, coin purses, belts and hardware from bags were layered and assembled to resemble an iguana, a bear, an aardvark and a caterpillar in celebration of the 100th anniversary of the Louis Vuitton SLG Savoir Faire collection — better known as “know-how” with small leather goods. In addition, this September customers will be able to have items such as the Zippy wallet and organizer customized as part of the Mon Monogram program.

MORE JACK WILLS IN THE U.S.: Jack Wills is cementing its foothold in the U.S. The British men’s and women’s wear retailer, whose designs riff on British collegiate style and are favorites of the Prince William set, will open four more stores in the U.S. over the coming months, in addition to its three existing ones. The brand will open stores in New Haven, Conn.; Southampton, N.Y. and Newport, R.I., in May, and in June it will open in Charlottesville, Va. The company has further openings lined up for fall, including a store in Philadelphia. Jack Wills currently has stores on Nantucket and Martha’s Vineyard and a U.S. flagship in Boston.

SCREEN SCENE: The race to dress the likes of Kirsten Dunst, Carey Mulligan and Tilda Swinton for the Cannes Film Festival has officially begun. Organizers of the festival, to be held on the French Riviera from May 11 to 22, on Thursday unveiled the list of the films in competition for the coveted Palme d’Or award. The main jury, headed by Robert De Niro, will be taking in performances by the leading ladies mentioned above along with Brad Pitt, Sean Penn, Ryan Gosling and Antonio Banderas. The starry lineup contrasts sharply with last year’s festival, which was criticized by some for a dearth of Hollywood glamour. Cannes stalwarts such as Pedro Almodóvar, Aki Kaurismäki, Terrence Malick and Lars von Trier will be pitted against first-time directors Markus Schleinzer and Julia Leigh, who is one of four women in competition this year, a first in the history of the festival. Woody Allen will open the festival out of competition with “Midnight in Paris,” starring Owen Wilson, Marion Cotillard and France’s First Lady, Carla Bruni-Sarkozy, in a supporting role — though if she walks the red carpet, she is sure to steal the show. Jodie Foster is liable to cause a stir with her feature “The Beaver,” starring Mel Gibson, which is also screening out of competition. Johnny Depp and Penélope Cruz, meanwhile, will be on hand to premiere the latest installment in the “Pirates of the Caribbean” saga. The full composition of the main jury should be revealed next week. The official poster for the 64th edition of the festival is an elegant black-and-white shot of Faye Dunaway taken by Jerry Schatzberg, whose rarely seen film debut, “Puzzle of a Downfall Child,” will be screened in a restored version in the presence of the director and star.