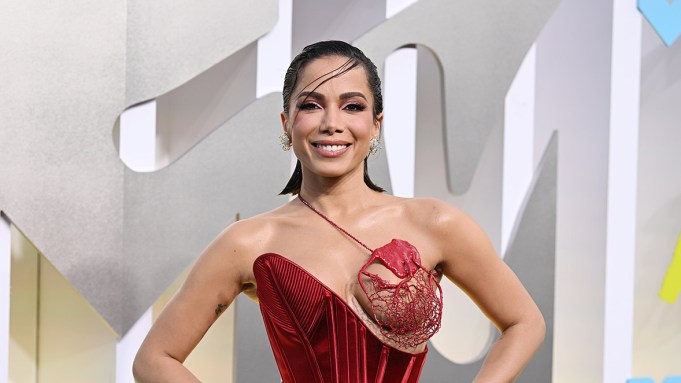 The Brazilian singer, whose international appeal has amassed her more than 63 million followers on Instagram, arrived at the MTV VMAs wearing an asymmetric red corset dress with a heart motif detail. The dress is from Schiaparelli’s fall 2022 couture collection, which took inspiration from creative director Daniel Roseberry’s teenage years, particularly the work of Christian Lacroix.

The dress was also part of a political statement made by Anitta. As the first Brazilian to ever perform at the VMAs, she was wearing the colors of former Brazilian president Luiz Inácio Lula da Silva’s party, who is leading in the polls against the incumbent Brazilian president, Jair Bolsonaro, in this year’s presidential election. Anitta said she was wearing Brazil’s heart on her dress, manifesting her desire for change.

Anitta accessorized her look with Tiffany & Co. jewelry, including a large silver cuff, several diamond rings and a pair of diamond earrings that resembled flowers. Her red platform open-toe strappy sandals were by D’accori.

For beauty, Anitta slicked back her hair with one strand across her face, contrasting with the style of her dress. She went for a statement-making nude lip, bright rose blush, a smoky eyeshadow with hints of purple, brown and scarlet, and a sharp eyebrow.