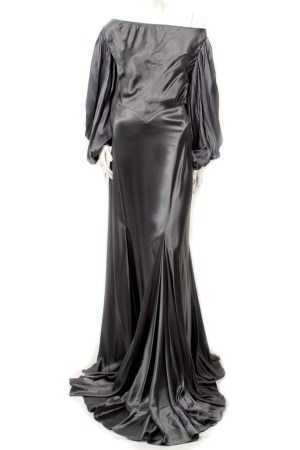 ANJELICA HUSTON GOWNS FOR SALE: Decades this week begins a sale of Oscar winner Anjelica Huston’s red-carpet looks. Included in the 150-piece collection is a Mollie Parnis gown Huston wore while attending the Cannes Film Festival with Jack Nicholson in 1974 and a Michael Kors gown she wore while accompanying the designer to the 1999 CFDA Awards. There are also several Oscar and Golden Globe gowns by Zac Posen, Bruce Oldfield, Giorgio Armani and Versace, among others. Pieces start at $140 and go as high as $2,800.

“I just moved this year from the house I lived in in Venice with my husband [the late artist Robert Graham], and I had accumulated a vast amount of stuff. My gowns in particular I kept in a cedar closet downstairs and I felt it was time to get them out there and allow them to have another life. Some of them are so great it seems wrong to keep them under wraps forever,” said Huston.

This story first appeared in the May 20, 2014 issue of WWD. Subscribe Today.

Among her favorites was the gunmetal gray Zac Posen she wore to the 2005 Oscars “because it was so comfortable” and the Vicky Tiel she wore to the Golden Globes in 1996 when accepting an award on behalf of her father John Huston for “Prizzi’s Honor.” “My zipper gave way on the podium that night, but it didn’t dampen my spirits,” she laughed.

Said Decades owner Cameron Silver: “I first met Anjelica at my house for a dinner in honor of Alber Elbaz many years ago. I’ve always been a fan of hers as an actress and a fashion icon. When she was ready to clean her enviable closets, we had a blast going through four decades of red-carpet moments.”