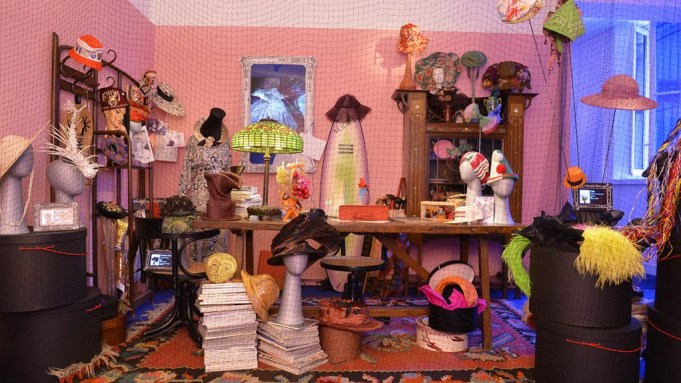 HEAD FIRST: The late Italian fashion editor Anna Piaggi had little space for knickknacks in her Milan apartment. “There were hats on every possible surface,” said Stephen Jones, the London milliner and curator of the “Hat-ology” exhibition in Milan, which displays part of Piaggi’s vast collection in a homelike setting.

Quirky toppers — a small violin, an upturned stiletto — are shown trapped inside fisherman nets, while one sun hat is propped on the tip of a surfboard, accentuating an eccentric taste that ran from Chanel couture to baseball caps. “She had 800 hats and we’re finding new ones every couple of days,” Jones marveled.

The bounty will be needed: Jones revealed that the Associazione Culturale della Moda Italiana, the family keeper of her legacy, plans to mount a major exhibition in 2015, possibly in Paris, featuring her hats and clothes.

Manolo Blahnik and Carla Fendi were among those who attended an opening party on Saturday night that spilled onto the Via Bagutta. The exhibit runs through Nov. 30.