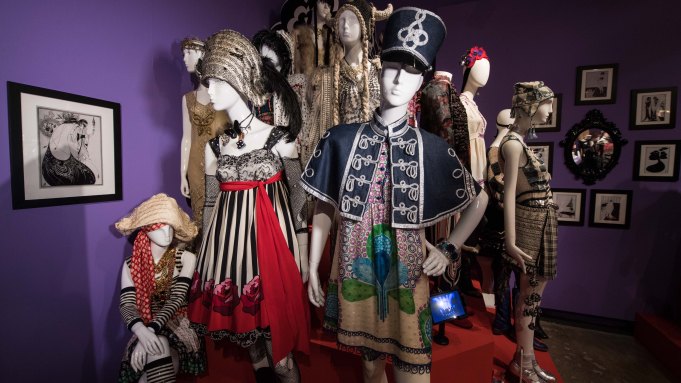 LONDON — “I never consciously thought about it, but I do see a pattern throughout my whole career,” said Anna Sui during a walk-through of the retrospective mounted by London’s Fashion and Textile Museum, which opens Friday.

“I think you can kind of see my thought process,” she said of the show. “I was transporting myself — and my audience — to different time periods that I didn’t even live through. Things that I read about. Things that I saw in movies and things that I fantasize about.”

Sui staged her first runway show in 1991, and is known for her exuberant looks made from rich fabrics, prints and colors, and for tapping into subcultures. The showcase features 125 ensembles complete with accessories, shoes and hats and highlights the designer’s collaborations, collections, interior work and process. Looks on display span from schoolgirlish silhouettes worn by Linda Evangelista and Naomi Campbell at her first show to the cowboy and cheerleader outfits modeled by Gigi and Bella Hadid during the designer’s spring 2017 show.

One room has been divided to showcase Sui’s 12 archetypes, ranging from the rock star and the schoolgirl to punks, nomads and surfers. The room has been designed as a mock-up of Sui’s New York store and is decorated with the designer’s thrift shop motif. Black mirrors and framed pictures hang on purple walls while the flooring has been done in bright red.

Sui pointed to a black-and-white Empire-waist dress with lace sleeves, a rose-print trim and a long red sash. “It is probably my favorite and that appears on the cover of the book,” she said. “I think that it is the quintessential Anna Sui dress.” She said her Japanese customers voted it as their favorite dress. “We actually reproduced it for special customers in Japan.”

The designer, who lived through the grunge and punk days, said music has always been a strong influence and it plays a big part in the show.

“One of my favorite bands ever is the New York Dolls,” she said. “I had pictures of them on the wall — as well as of Marie Antoinette. The dress code back in those days was black and white or red. You could wear roses or stripes and fishnets evoking the punk movement — all of that was in that one outfit. I think that’s kind of like the way my brain works, when I’m working on a collection.”

She also motioned to a delicate white cap-sleeve baby-doll dress, worn by Campbell, Evangelista and Christy Turlington in a 1994 show. “I think this moment really captured what was going on then,” Sui said. “The most famous moment of that show was the baby dolls.” Somehow, Evangelista signaled to Campbell and to Turlington to stop and wait. “So the three most powerful supermodels stopped on the runway and became a moment of supermodel history.”

Another room is dedicated to the designer’s inspirations while she was growing up in Detroit. It is filled with magazine editorials and colorful sketches, various achievements and looks from Ossie Clark and Biba. Another focuses on her life in the Big Apple. Sui moved to New York, studied fashion at the The New School’s Parsons School of Design and opened her first store there in 1991.

There’s an area dedicated to her creative partnerships with industry names such as Pat McGrath, Erickson Beamon and James Coviello. Sui’s mood boards, photographs, runway photographs and sketches are also on display.

“Anna Sui has presented a unique voice in fashion — she has remained consistent in her vision and her approach,” said curator Dennis Nothdruft. “Her work is compellingly narrative — she is a supreme storyteller. Her work helped to redefine American fashion in the Nineties and she has remained true to her vision from the beginning as an independent designer. She continues to inspire. As fashion moves back to her way of thinking, she remains a reference point.”

The exhibition, in association with Albion Cosmetics and Inter Parfums Inc., will run until Oct. 1.