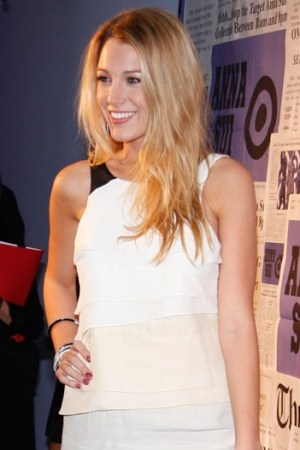 ANNA’S NIGHT: The crowds at Anna Sui’s Crosby Street pop-up shop for Target on Wednesday night certainly boded well for the following night’s NYC Fashion’s Night Out shopping extravaganza. A line formed well out the door of the four-story SoHo townhouse, decked out Sui style — a purple, black and rock ’n’ roll motif — and stocked with the designer’s “Gossip Girl”-inspired collection for Target. Even with the cast of the CW hit in the house — Penn Badgley, the first to arrive, looked downright scared by the masses of hanger-mongering girls — the clothes were the main attraction. “Will you be my bodyguard?” asked Michelle Trachtenberg, who’s busy shooting her new NBC series “Mercy,” of a publicist, before making her way into the fashion fray. For her part, Sui, a big fan of the show, couldn’t have been more pleased by the turnout of shoppers and celebrities: “Michelle [Trachtenberg] just told me Anna Sui was her first fragrance ever.”

NATURE’S CALL: Rather than show a collection for spring — an undertaking he deemed “too expensive; there’s a lot of financial stuff” — Miguel Adrover, the creative director of German-based eco-minded clothing firm Hess Natur, has teamed up with Whole Foods to create a T-shirt to be sold exclusively at the retailer’s stores and on its Web site. The shirt, which will retail for $19.99, features an earth image, which Adrover said was inspired by his concerns for the environment. “First [you think about] what goes in your body, and then what’s on top of the body,” he said, adding he has not ruled out a line of eco-fashion for a store such as Whole Foods. The company plans to produce 10,000 shirts. Adrover, meanwhile, said he hoped to show a collection in February.

LIBERTINE SPLIT: Libertine co-founders Johnson Hartig and Cindy Greene have split, and Hartig will continue to design the line “with a return to its roots,” he told WWD. “I’ll just be doing the vintage pieces that we started with eight years ago, not the newer productions we have been doing for the past three years.”

COSTUME PARTY: Victoire de Castellane, Dior’s fine jewelry designer, said she plans to introduce a signature line of costume jewelry, slated to launch at the end of 2010. “There will be around 10 to 15 unique pieces, each telling a different story,” she related at a garden party Wednesday night at the Hotel Monnaie in Paris organized by French gallerists Kamel Mennour and Clémence and Didier Krzentowski of Galerie Kreo. De Castellane is throwing her hat in the costume jewelry ring at an interesting time, given that Louis Vuitton’s Camille Miceli is slated to arrive at Dior next month as artistic director of its costume jewelry lines. Other guests at the party included Azzedine Alaïa, fresh off a vacation in Tunisia and surrounded by a gaggle of “Alaïa girls,” as he put it. Alaïa said he plans to host a charity art auction on Oct. 19 at his Marais headquarters.

A REAL CLOTHES HANGER: Apparently, sometimes it is best to end a career to start a new one. Last month after word spread that his 22-year-old company would close, Eric Gaskins, the designer and blogger behind Theemperorsoldclothes.blogspot.com, inked a deal for a tell-all book due out in the next year. TV producers have turned up at his doorstep to talk about doing a show and he hasn’t ruled out joining another label as creative director.

CHILD’S PLAY: Some liken preparing a show to having a baby, and Monique Lhuillier really knows the feeling. Before her Christies presentation Thursday, she briefly took a load off her feet and explained her daughter is due in November. Her name will be Sophia.