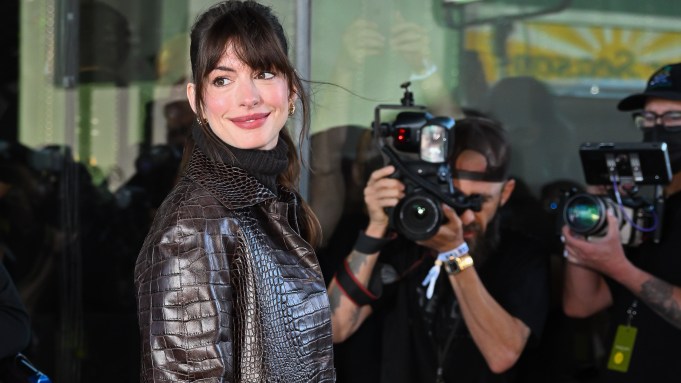 Anne Hathaway is looking to one of her most iconic movie roles for fashion inspiration.

On Wednesday, the Oscar-winning actress attended the Michael Kors spring 2023 show in New York City dressed just like her character from the cult classic film “The Devil Wears Prada.” She wore a crocodile-print brown leather trench with a matching miniskirt over a black turtleneck sweater. She topped off the look with pumps from Christian Louboutin and styled her hair in bangs, just as her character Andy Sachs did in the movie.

Hathaway was styled by Erin Walsh, who also works with the likes of Juno Temple, Lana Condor and Alison Brie.

To cap off the nostalgic moment, Hathaway sat next to none other than Anna Wintour, the editor in chief of Vogue and the prime inspiration behind one of the main characters in the film, named Miranda Priestly, played by Meryl Streep. She also sat close to tennis legend Serena Williams.

Fashion watchdog account Diet Prada first posted the resemblance on its Instagram, causing a social media frenzy as fans of Hathaway and the movie recognized the fashion-forward outfit from the movie. In the film, however, Andrea wears a brown leather jacket paired with dark-wash jeans with a black turtleneck.

“The Devil Wears Prada” is still referenced as one of the most celebrated fashion movies in recent history, with outfits many still take inspiration from today.

Adapted from Lauren Weisberger’s novel of the same name, the film takes a look at the ins and outs of working in the supposedly cutthroat fashion industry. The plot follows the story of recent college graduate Andrea “Andy” Sachs who lands the highly coveted job of being the co-assistant to powerhouse magazine editor Miranda Priestly.

Weisberger’s bestselling book, released in 2003, was a roman à clef detailing her own personal experience as an assistant to Wintour.