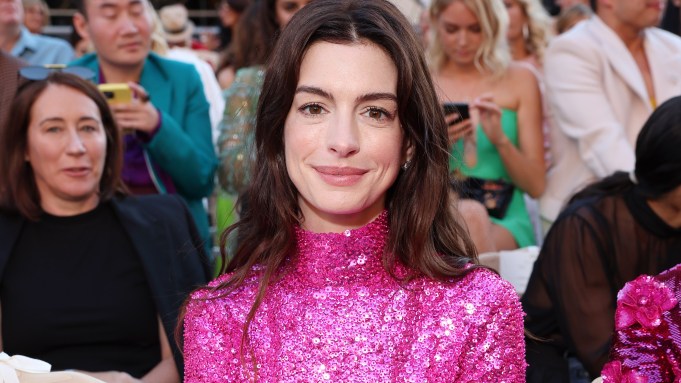 Anne Hathaway has done it again.

On Friday, the actress attended the Valentino couture show for its fall 2022 collection in Rome, held at the city’s famed Piazza di Spagna. She wore a sequin mini peplum dress by the Italian luxury fashion house in its now-signature magenta hue.

She wore her hair down, with accessories by Valentino, including a matching mini stud handbag and patent platform heels. She is usually styled by Erin Walsh, who also works with Ashley Park, Juno Temple and Adriana Lima.

Sitting front row at the show, the award-winning actress snapped photos with other A-list stars in attendance, including Ariana DeBose. Andrew Garfield, Naomi Campbell, Florence Pugh and Kate Hudson, among others, were also there.

Hathaway’s Valentino appearance comes during a year where she’s stepped out in some of her most fashion-forward outfits yet.

During the Cannes Film Festival, the actress’ first, Hathaway went viral for her outfits, which many fans thought were some of the best of the coveted international event.

For the premiere of her upcoming movie “Armageddon Time,” she wore a custom white column sequined gown by Armani Privé, featuring a small cutout on her midriff and matching off-the-shoulder shawl with a long train. She also wore the Bulgari’s Mediterranean Reverie necklace and a matching sapphire ring from its high jewelry collection, making her debut as its brand ambassador.

“You always want to create a statement that’s both of the moment and timeless,” Walsh told WWD of styling Hathaway for Cannes. “You always want to do something that feels innovative, fresh and fun. I feel like you look at her on that carpet and she’s so meant to be there. So the clothes are the icing around that fact.”

Valentino may have been built on red, but for its fall 2022 runway show this spring, the house hue was an intense, magenta “Pink PP,” a new Pantone color created by Valentino’s creative director Pierpaolo Piccioli.

“Pink is a color I really like, and it’s also a color that can have different sides,” Piccioli said in March.