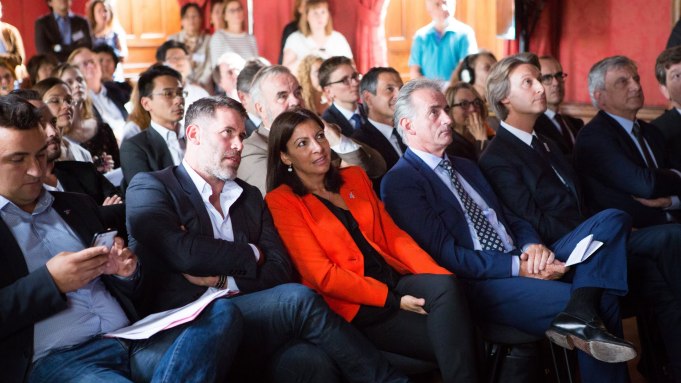 PARIS’ JE NE SAIS QUOI: A bevy of company chiefs joined Paris Mayor Anne Hidalgo on Thursday for the unveiling of a film promoting the City of Light as a go-to destination. Breaking today and running for five weeks, it was directed by Jalil Lespert.

“The message that we’re sending to the world is [that Paris is] a city that moves forward, isn’t afraid, that protects itself, of course, and wants to welcome tourists in the best possible conditions. [It’s] a city that faces a global challenge,” Hidalgo told attendees at a press conference in the city’s Hôtel de Lauzon mansion. The mayor, sporting an orange Sonia Rykiel jacket, was on a stage with Lespert, who has also directed “Yves Saint Laurent” and “Versailles.”

As WWD revealed, the Paris film stars personalities including Karl Lagarfeld and Alain Ducasse, plus locals and tourists in the city. Its making-of took place in iconic sites, including the Louvre, Eiffel Tower and Galeries Lafayette department store, as well as places less known to tourists. The film, whose sponsors include LVMH Moët Hennessy Louis Vuitton, Galeries Lafayette, Kering and Air France, is part of a larger strategy to promote Paris, budgeted at about 2 million euros, or $2.2 million at current exchange, that was started in May by French authorities and other backers.

It’s meant to lift spirits in the grim climate for tourism following the Paris attacks late last year. While the city remained the first touristic destination in the world in 2015 with 16 million visitors, the Nov. 13 attacks continue to weigh on visitor levels today. Occupancy rate of foreign guests in hotels was down 10 points in the first half of this year, and it declined 12 points and 20 points in July and in August, respectively.

“We saw an uptick in early July, but the Nice attack happened and broke the momentum,” Nicolas Lefebvre, managing director of the Paris tourist and convention office, told WWD. He explained that another increase isn’t expected until November.

Gagey described the current situation as an “economic disaster.” “Traffic to Paris is down 10 percent to 12 percent, and by 30 percent to 40 percent from some countries,” he said to the audience.

The film’s formats range from 15-second to two-minute-and-30-second clips that will be shown in venues including airports, airplanes, hotels and on social media. “We’ll bring Paris abroad thanks to our presence in Shanghai, Milan, Times Square in New York, London,” said Decaux of the company’s outdoor advertising billboards.

Starting in November, Air France will air the Paris film on board its long-haul flights, which number 1,000 and involve 300,000 travellers per week. “Passengers won’t have the option to skip it,” Gagey said.

Jean-François Martins, Paris’ deputy mayor for tourism, said that companies with a presence in Paris, such as Google and Facebook, are also to help promote the film online. LVMH and Kering’s networks of stores are also involved.

“We’re going through difficult times, but I am confident,” said Toledano. “The shows are coming. Dior, Chanel, Saint Laurent, Hermès, all these houses were born in Paris. We excel abroad, but we owe a lot to Paris. Our ateliers are in Paris. We expand them, we hire. It’s this attractive message that we want to send out.”

Another upcoming fashion-related event is the exhibition “Esprit Dior” coming to the City of Light in June to help mark the house’s 70th anniversary.