The Danish rising designer paraded a bohemian and feminine collection. 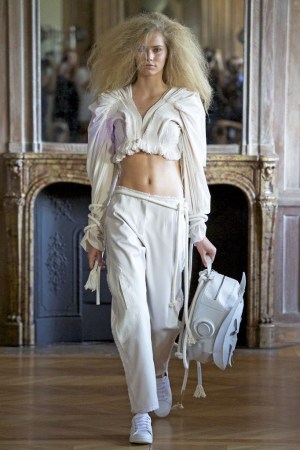 DANISH STYLE: For her first show in the French capital, Danish rising designer Anne Sofie Madsen sent out a bohemian and feminine collection at the Danish ambassador’s residence. The lineup included pleats, quilting and ruffles in pale, dusty colors.

It was a shift from the rugged fall 2014 collection that she showed in the Danish Magasin du Nord department store parking lot during Copenhagen Fashion Week. (Madsen won the prize donated by the Magasin Du Nord Foundation.)

“This is season, it was about loosing control, opening up a bit. It is a more intimate,” Madsen explained after her show.

The label is sold at stores including 10 Corso Como, Luisa Via Roma in Italy and H. Lorenzo in Los Angeles.