The Danish designer offered up an encore presentation of her fall show in Tokyo on Wednesday as part of the city’s fashion week. 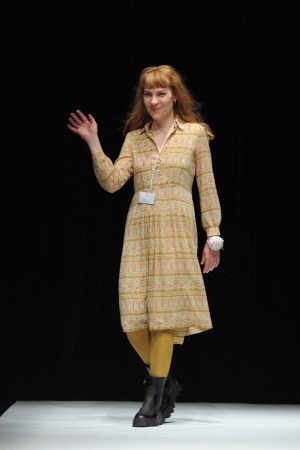 Danish designer Anne Sofie Madsen offered up an encore presentation of her fall show in Tokyo on Wednesday as part of the city’s fashion week. This is the first of two trips she is making to Japan as through the DHL Exported program. She will be back at Tokyo fashion week in October to show her spring 2017 collection.

The designer said she developed an interest in Japanese culture and art from a young age by watching the animated films of Hayao Miyazaki. Madsen said the country’s contemporary art and fashion inspire the way she works today. She said she was going to try and take in an exhibition of Nobuyoshi Araki’s photographs before heading home.

“I think I’ve always been really fascinated and interested [in] Japanese culture,” she told journalists after her show. “What I’ve seen of Tokyo so far, it’s really amazing and I want to explore it a bit more.”