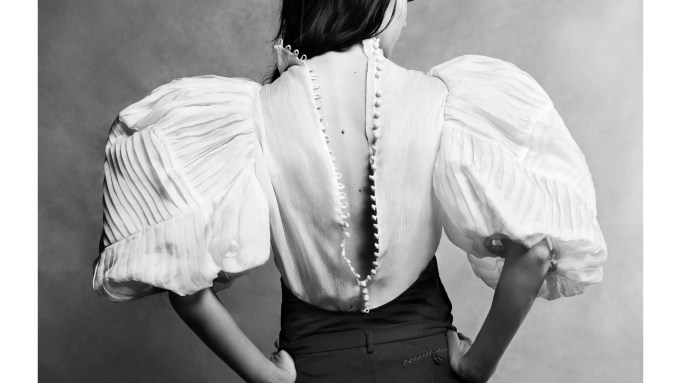 HIGH ROAD: Anne-Valérie Hash is to get the museum treatment. The designer whose contract as creative director of Comptoir des Cotonniers is to end on May 31, as reported, will take center stage in a new exhibition titled “Décrayonner Anne-Valérie Hash” at the International City of Lace and Fashion museum in Calais, France.

Hash has been using lace for 13 years as a key fabric in the creations of her namesake label. A partisan of the masculine-feminine mix, she played with customs to create pieces including light blouses, retro-reflective tops and androgynous jumpsuits — all featuring lace. “The point was to use lace, including in pieces of the men’s wardrobe,” Hash told WWD.

The exhibition— the first dedicated to the designer in France — is to detail her creative process: Hash does not tackle her creations with a pencil but with scissors and needle. Therefore, the exhibit will not involve drawings, sketches or drafts, but garments, fabrics and patterns. “I have always worked in 3-D with the fabrics in the hands, like a sculpture,” Hash explained.

The showcase, curated by Sylvie Marot, is to take over the museum’s 5,380-square-foot permanent exhibition space, following a thematical order. It will feature approximately one hundred models, plus videos and documents. Pieces to be displayed will come from the personal archives of her namesake house and loans from Palais Galliera, the fashion museum of Paris.

Hash presented her first haute couture collection as a fully fledged member of the Chambre Syndicale in 2007. She shuttered her label in 2014 amid challenging economic times for independent fashion companies. A graduate of the École de la Chambre Syndicale de la Couture Parisienne, she received France’s ANDAM Prize in 2003.