The brand's 43rd calendar focuses on distinguished women of all ages. 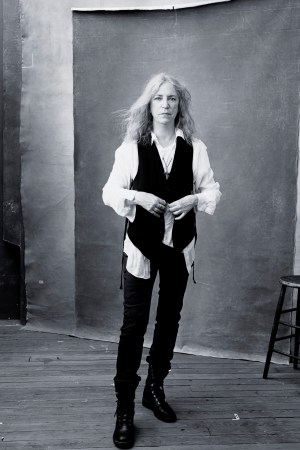 ANNIE’S AMBITION: The Pirelli calendar photographed by Annie Leibovitz and unveiled Monday in London has been modernized for 2016 with a focus on distinguished women of all ages.

From the art world to the sporting one, 13 women from a variety of industries were selected for the calendar. They include Natalia Vodianova, Serena Williams, Fran Lebowitz, Yoko Ono, Patti Smith and Amy Schumer.

Leibovitz shot classic black-and-white portraits of the 13 women in her studio last July, and acknowledged that it’s a big step for the brand.

“I’m very very proud of it, and I’m proud of Pirelli for taking that step, too — it’s such a big step,” Leibovitz said. “It shouldn’t be — but it is.

“I think that Pirelli has been wanting to do this for a few years, to shift,” she said, adding, “I love to take something that you wouldn’t expect and make something out of it. I’m not afraid of that.”

She recalled that when she was asked to do the calendar back in 2000 she did a whole series of nudes. “I had never really done nudes before and I did them with Mark Morris dancers and it was an incredible exercise. So it’s wonderful to really be given the reins and told ‘Go do this.’ So I am more proud than ever when I see this film,” she said, referring to the behind-the-scenes film.

The 43rd calendar was launched at a news conference in London’s Mayfair.

In the short film, Williams — who poses for the month of April — noted that she was able to show a different side. “Being a black girl put into this, I hope that I would represent something iconic, something that people would really like to be, and people would really like to do,” she says. “People can really relate to me because I don’t hide who I am. Annie definitely shot something in me that not only do I like, but I love, it shows a different side. I love being one of the first, one of the pioneers, and I think it’s really exciting to be inspiring to other people.”

Vodianova noted in the video that she’s happy with the new direction. “Today, society is moving toward embracing all kinds of women and empowering them further to do more, to say more, to be stronger and I’m very happy for the Pirelli calendar that it is going in that same direction.”

As for retouching the photos, Leibovitz noted there wasn’t a lot of work to do. “It’s done in black-and-white. There might have been a little cleaning up, but everything was pretty much straightforward and it’s important for it to stay that way.”

The calendar can be viewed on pirellicalendar.com.