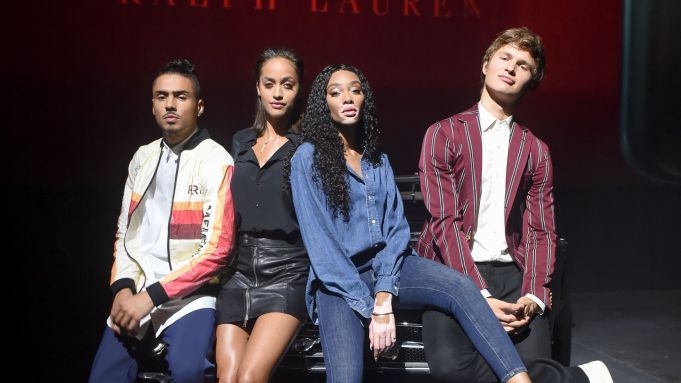 Held at the Classic Car Club in Manhattan, the fragrance launch party drew Ansel Elgort, Alanna Arrington, Winnie Harlow, Danielle Herrington, Hannah Bronfman, Taylor Hill and Quincy Brown, who posed with one another on the classic cars lining the room.

Earlier in the day, Elgort made headlines both for his new role as global ambassador for Ralph Lauren Fragrances and for appearing in the campaign video for Polo Red Rush. Speaking from the launch party, the actor-slash-musician said he hadn’t even gotten a chance to take in the online buzz from the video because he was working.

“I wasn’t on my phone all day today ‘cause I was in a really big screen test, so I didn’t even see the [online] reaction,” he said at the party. “I looked on Instagram for a second and saw all my fans reposting. If my fans like it, it’s a good sign. I like my fans.”

Arrington was featured alongside Elgort in the campaign video, which required her to jump off of a cliff — a creative decision Elgort said was actually inspired by his longtime girlfriend, ballerina Violetta Komyshan. Speaking from the launch party, Arrington said she “learned so much” from Elgort when it came to acting in the video. Though she hadn’t ever done anything as drastic as jumping off a cliff before, she called the overall experience “a dream come true.”

“They were like, ‘So have you done any diving or anything?’ I was like, ‘Well, I took swimming lessons, so I think I can nail anything,'” she said. “It was fun. We had stunt doubles there as well for safety. All of the scenes we got to shoot were exciting.”

A fan of classic cars, Brown said he enjoyed the campaign video, which he described as “chill thrill.”

“We’re in it for the thrill of it,” he said, adding, “I can’t say I own a classic car. For my 16th birthday, I got a 1969 Lincoln Continental, which was a little bit ahead of my time. It was a gift from my mom. I had it for a little under a year before I traded it in, got the money and put it toward my career. But I definitely got a little taste of some old school-ness.”