ONWARD WITH KORS: About 20 anti-fur protesters disrupted Michael Kors’ talk with Alina Cho at the Metropolitan Museum of Art on Wednesday, chanting, taunting and making animal-like sounds. The animal activists literally took to the stage in the Grace Rainey Rogers Auditorium, encircling the designer and Cho while shouting at him for his use of fur. Several others were in the mezzanine unfurling a homemade banner that read “F!!k FUR.”

The designer was only 10 minutes into his chat.

After the disruption was calmed down, Cho returned to the stage with “There’s never a dull moment.” And Kors added, “It’s fashion.”

The designer reminded guests how he once had plaster from a ceiling fall during one of his runways shows and land on the head of fashion critic Suzy Menkes. He also paraphrased the designer Michael Vollbracht’s book “Nothing’s Sacred,” which staked the claim, “Fashion is not for sissies.”

The “life goes on” attitude the pair exhibited after the fact was understandably not in effect when the bedlam was going on. As the protesters carried on and a few got too close to Kors in the process, he snapped back, telling them to get away from him. 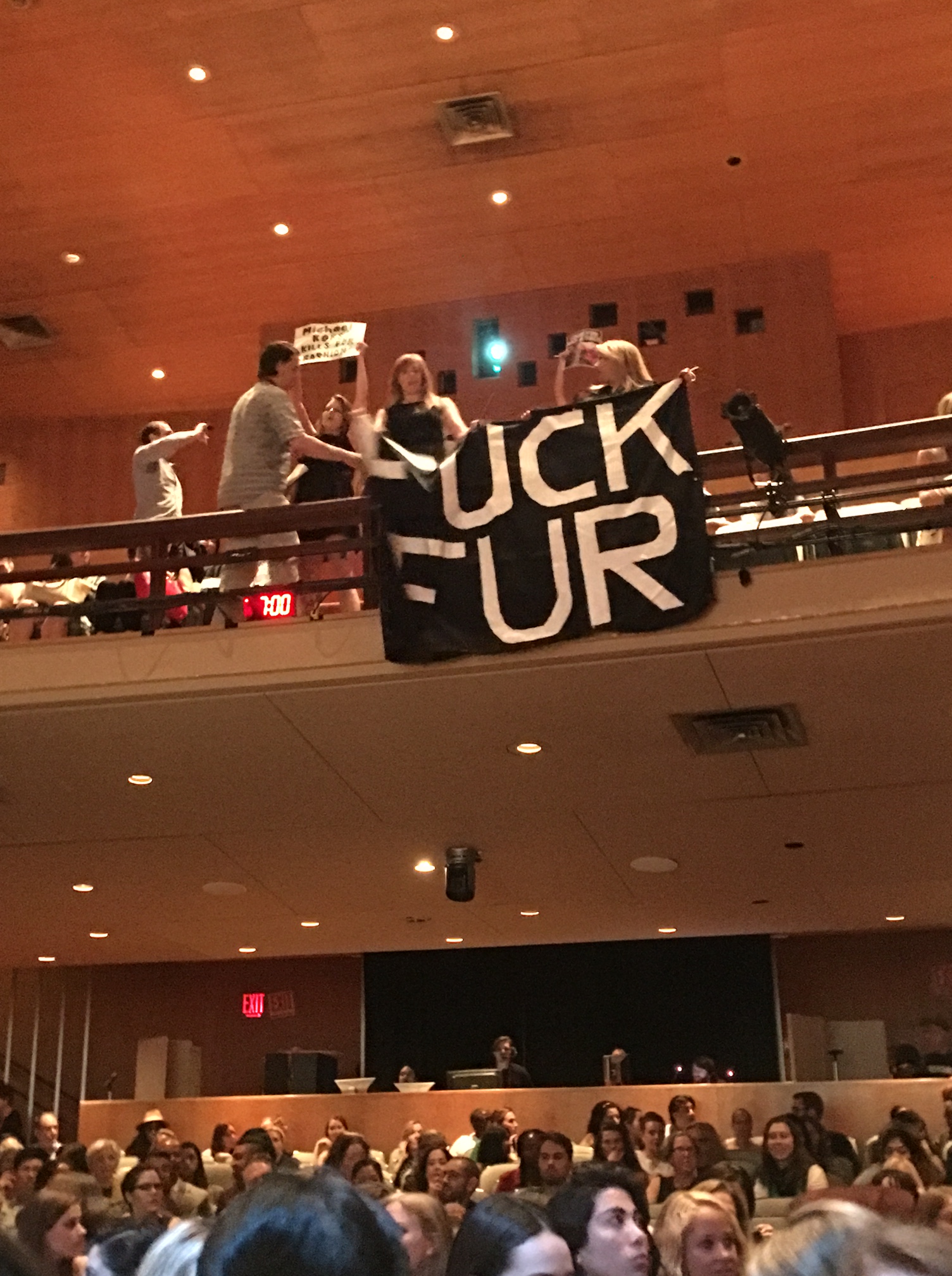 Meanwhile, Kors’ husband Lance LePere, who was seated in the front row of the auditorium, swiftly exited but later returned with John D. Idol, chairman and chief executive officer of Michael Kors.

While a few Met employees were impressively calm, doing their best to try to usher the demonstrators off the stage and out of the auditorium, their efforts were largely ignored. One activist yelled that Kors should not be using fur in 2017 and vowed to continue to target any designer that did so.

The limited number of museum security in the auditorium had little success trying to remove the activists. Eventually they managed to get them to leave with the help of a few others. It took about six minutes for them to be shown to the door. During that time, guests were advised to remain seated. “That was really disturbing,” one twentysomething said as her friend nodded in agreement.

Wednesday’s protest was not Kors’ first run-in with activists. In September, a handful of anti-fur supporters marched outside his SoHo store, including one who wore an oversized Kors-like costume head.

Judging from Kors’ the-show-must-go-on attitude Wednesday night, he is not one to let anyone stand in his way. He and Cho never considered not ending their talk. That no doubt was welcome news to the estimated 250,000 people who had tuned into the Met’s talk via Facebook live.

Interestingly, Mark Oaten, global chief executive officer of the International Fur Federation, said Thursday, “Screaming and yelling animal activists will not stop Michael Kors or his millions of customers from expressing their right to choose what they wear.”

“Freedom of choice is a basic right and I find it shocking that these protestors don’t respect that. Their bullying aggressive and disturbing tactics have no place in a world where there is already too much violence- and certainly not in the fashion world. As Michael Kors said last night, ‘It’s fashion… life goes on,’” Oaten said.