Rachel Roy has designed two T-shirts that are being auctioned off to support “Bully,” The Weinstein Co. film playing in theaters. 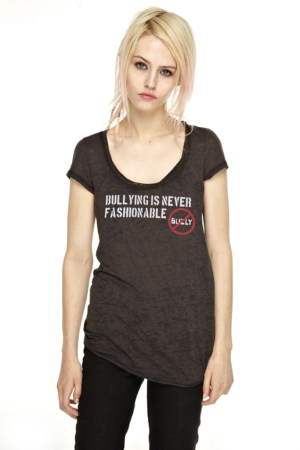 ANTIBULLY BANDWAGON: Rachel Roy has designed two T-shirts that are being auctioned off to support “Bully,” The Weinstein Co. film playing in theaters. Bidding began Friday at $100 on charityfolks.com/Bully, with proceeds going to Facing History and Ourselves, a nonprofit organization that provides bullying prevention training for educators and administrators.

“As a designer, I have the luxury of being able to create a product that lets people express themselves,” said Roy. “These Ts do exactly that. They get the message out loud and clear that bullying is a critical issue that needs as much attention as possible.”

Others who have helped get the film’s message out include Justin Bieber, Ellen DeGeneres, Meryl Streep and Tommy Hilfiger.