The designer, in Hong Kong for an event with Lane Crawford, spoke about Chinese consumers' desire for individualism and the need to bring more fun back into fashion. 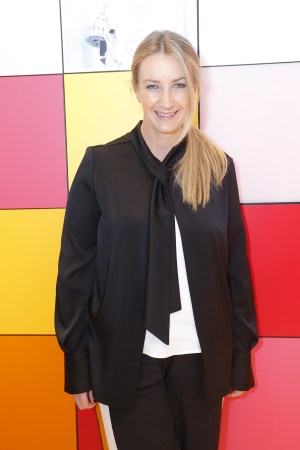 HONG KONG — It has been 23 years since Anya Hindmarch opened her second freestanding store in the world in this city — a boutique in the central district’s On Lan Street.

“I remember arriving and seeing it covered in bamboo scaffolding,” Hindmarch recalled. At the time, On Lan Street was populated with local establishments and not exactly a prime destination for luxury brands. “I think we were the first sort of…store that wasn’t like a takeaway food store.”

Two decades later, Hong Kong itself and the dynamics behind the British designer’s handbag business have transformed radically. The On Lan Street boutique shuttered several years ago — as Hindmarch quickly realized that air-conditioned shopping malls were the best way to go in Asia, especially in a sweltering tropical climate like Hong Kong. Her brand has since expanded its network to some 59 sales points in Asia, spanning markets such as China, Japan, South Korea and Taiwan.

The meteoric rise and subsequent slowdown of the Chinese luxury goods market has ushered in a new era. It’s time when customers favor small, niche brands with an individualistic feel, rather than status symbols and flashy logos. Although her company declined to provide sales figures, she said that trend is benefiting her business, known for its quirky handbags that riff on pop cultural references like Pac-Man and Tony the Tiger.

“I saw this here in Hong Kong 20-something years ago, where you know, every store was ‘new arrivals’ and people were dressing head to toe in one label and there was a less international outlook [than other cities like London],” the designer said. “Now they’re looking for something that sort of is a bit more, you know, unique and says perhaps more about them.”

The designer, in town for an event with Lane Crawford, expressed wonder at the view from a 49th floor suite at the Upper House hotel overlooking a vast expanse of the city’s harbor, skyscrapers and construction cranes. “There’s so much building going on, I can’t believe it,” she said.

Hindmarch said she has a special fondness for China — her son studied in Beijing for a year during his university days and she visited him at Christmas time when the temperature dropped to a punishing minus 10 degrees. Meanwhile, her husband’s grandfather was the British ambassador to China in the Thirties.

“There’s a bit of my heart there in a way,” said the designer, clad in a relaxed pajama-style top and wide-leg pants in black.

China isn’t the only country on Hindmarch’s mind these days. Just weeks after the Brexit vote, which stunned the world and set the stage for the U.K. to leave the European Union, the designer is coming to terms with the verdict and the fact her country is entering unchartered political territory. A Remain campaign supporter, the outcome shocked her initially but now she is considering the positive consequences of the historic referendum — namely a surge in sales at her stores in London as foreign tourists look to exploit the newly devalued pound and snag bargains.

Hindmarch said there might be other advantages to an independent U.K. For example, the country could act more decisively in areas like border control, which could bolster tourism and retail by making consumers feel safer, she argued.

“I think actually we’ll be fine. I’m much less worried actually than I’d thought I’d be,” she said. “Now we’re there, I think we need to get on and make it work. And all my French and Italian friends are kind of looking a bit envious at the moment.”

The Brexit era also means new political leadership for the U.K. The designer — a Conservative and friend of former Prime Minister David Cameron — stopped short of saying much about newly tapped Prime Minister Theresa May from a political standpoint. “She’s great…she’s a fantastic woman, strong,” she offered before attempting to change the subject. But Hindmarch was willing to dish a bit on the fashion-conscious politician’s style and said she appreciates May’s support of her own brand and that of other British designers.

“She has always worn our bags, which she buys completely independently,” she said. “I mean [London] is a very creative city and it’s very much a sort of strong point. I think for us to have leadership that understands the joy and the benefit of that is really important.”

Joy is a recurring theme of the conversation with Hindmarch, who is sporting a deep burgundy nail polish on her fingers and toes. (It’s an identical color match to her shearling bags paying homage to the Pac-Man ghosts. The fall bags in that particular hue are making their retail global debut at Lane Crawford this month before they rollout to other markets in September.)

“I think that people come to us because they want a bit of fun. I think they’re a bit bored of really straight, achingly serious fashion. I think that is the point of fashion, to say who you are,” she said. “It’s a nice way to communicate and show your character. I think that’s the joy of fashion.”

The designer traveled through Asia to meet with customers at Lane Crawford’s stores in Hong Kong and Shanghai. In Hong Kong, on Wednesday night, she mingled with fans and posed for snaps at Lane Crawford’s Canton Road store in Kowloon. The brand is taking over the luxury retailer’s Library Café through Aug. 15, serving up special menu items, like English breakfast and a high tea set featuring ghost-shaped macaroons.

Her fall collection with retro video game references, paved the way for inevitable comparisons to the Pokémon Go craze that is sweeping the globe.

Hindmarch said she just downloaded the app and she’s eager to commence her quest to capture the game’s critters. Her team already alerted her to the presence of one of them in the basement of her store on Madison Avenue. She also got a laugh out of a recent photo British GQ editor Dylan Jones posted of a Pokémon character in his vegetable garden.

“Grown-ups like to play. You know, they don’t just want to be grown-ups,” she said. “We’re still kids at heart.”