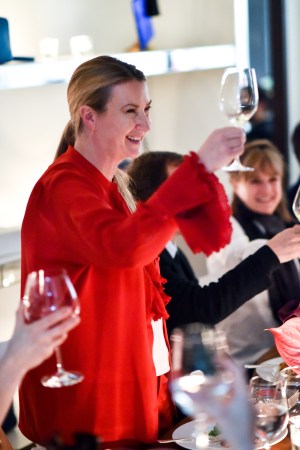 TABLE TALK: The worlds of fashion, architecture and design collided on Tuesday night over steaming plates of shepherd’s pie at a dinner hosted by Anya Hindmarch and Martino Gamper, who’ve been working together of late.

Hindmarch saw Gamper’s book “100 Chairs in 100 Days,” fell instantly for his off-kilter aesthetic and asked him to design pieces for her shops. Gamper, a northern Italian designer who’s based in London, uses reclaimed materials, such as wood and formica, to create new furniture.

“We have a lot in common — a sense of humor, craftsmanship and obsession with design,” said Hindmarch, who hosted the dinner at her Bond Street store.

Gamper has been making tables, chairs and workstations for Hindmarch’s leather embossers. “I’m getting tired of ‘shop fit’ design,” she said of her decision to tap Gamper.

Guests gathered around Gamper’s lean and elegant reclaimed wooden tables, which snaked down the center of the store’s ground floor and dined on pie and peas. Later, one of Hindmarch’s favorite entertainers, Earl Okin, sang and played the guitar while an apple and blackberry crumble made its way around the table.

Conversation turned to future projects, with Gamper talking about his show at the Anton Kern Gallery in New York with Francis Upritchard, his upcoming collection of men’s accessories with Valextra and a collaboration with Nike that will go on show at Milan’s Salone del Mobile in April.

Many of the dinner guests are headed to the Fondazione Prada in Milan to cheer on their friend Goshka Macuga, whose show “To the Son of Man Who Ate the Scroll,” opens next week.