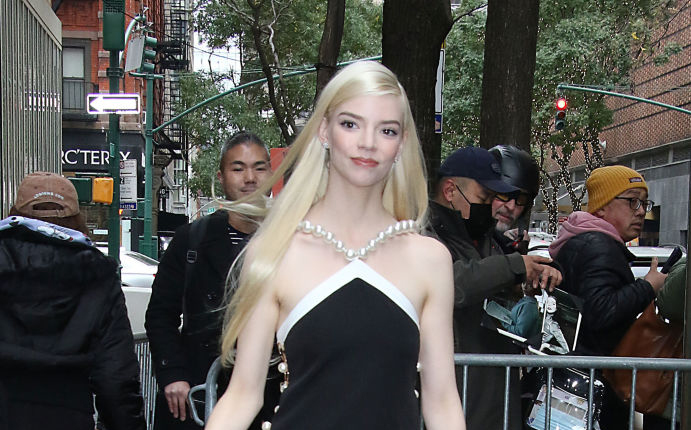 Anya Taylor-Joy left the studios after her appearance on “Live With Kelly and Ryan” in New York City on Tuesday wearing a bold cutout dress.

The actress wore a black dress by PatBo with a pearl neckline and side cutouts adorned with rings accented with pearls.

She accessorized the look with a pair of diamond stud earrings and classic black heels by Christian Louboutin.

Taylor-Joy worked with stylist Ryan Hastings, who has been working with Taylor-Joy throughout the ongoing promotional tour for her new movie, “The Menu.” He’s dressed the actress in brands including Dior, Alexander McQueen and Christian Louboutin. Taylor-Joy is a global brand ambassador for Dior.

For makeup, Taylor-Joy went with a glossy pink lip, a touch of blush and a hint of mascara. She had the front of her hair slicked down to one side while the rest was straight.

During her segment on “Live With Kelly and Ryan,” Taylor-Joy discussed her role in “The Menu,” and notably, her costar Nicholas Hoult’s eating habits for multiple takes. The actress revealed that Hoult “ate the weight of a small whale” in bread while filming, committing to really eating for every attempted scene.

Taylor-Joy and Hoult recently attended the New York premiere of “The Menu” on Monday, with both stars wearing Dior. She selected an embroidered dress with a crinoline skirt and fishnet-style sleeves, while he wore a beige cashmere double-breasted bar coat, a beige silk shirt, a white embroidered tank top, light green wool and cashmere striped twill flare pants.

“The Menu” will be released in theaters on Friday.