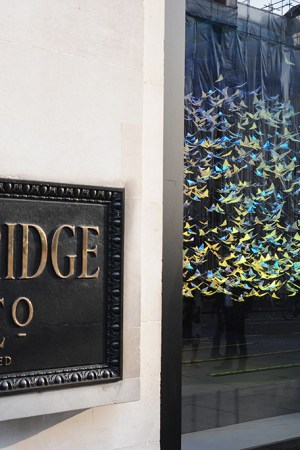 TIME TRAVELERS: Apple Watch made its European retail debut on Friday morning with upscale shop-in-shops at Selfridges in London, where the brand filled the windows with an installation of iridescent butterflies, and Galeries Lafayette in Paris.

The stores were packed with mostly male shoppers testing out the 38 iterations of the multitasking watch that’s part personal trainer and executive assistant, part navigation device and instant chat tool. Oh, and it tells the time, too.

“This is just fabulous: It syncs with the iPhone, which means you have the freedom to leave your phone on your desk and still be able to check on everything,” said Herbert Yip, a Hong Kong native who was visiting London with his family.

Yip said he was leaning toward ordering the sports model. “I was going to buy another device to use as my health kit, but when I knew the Apple was coming out with its own, I waited,” he explained.

The Apple Watch shop at Selfridges is located in the Wonder Room on the ground floor, which is also home to brands such as Bulgari, Chopard, Cartier and Tiffany & Co.

Apple has filled the space — which is permanent and spans about more than 1,000 square feet — with towering ficus trees surrounded by plush caramel-colored leather benches and a long wooden display table that weighs one-and-a-half tons. The brand also filled the windows facing Oxford and Orchard Streets with delicate aluminum butterflies made into the 3-D shape of an apple. The butterflies sparkled as multicolored lights flicked over them.

The store treated customers — many of whom had pre-booked demonstration appointments — to iced Earl Grey tea and shortbread biscuits. The mood was buzzy, but civilized, as prospective buyers crowded around the chunky wooden table, peppered Apple’s experts with questions and tried on the watches that will land in-store on April 24.

Apple declined to give any details about orders taken so far.

In Paris, the crowd fanned out over the luxury and designer floor of Galeries Lafayette’s flagship, where Apple had built a sumptuous 2,000-square-foot showcase bordering the central atrium, which is capped by an imposing stained-glass cupola.

“It’s surprising,” Benjamin Randazzo said as he surveyed the scene. The 22-year-old student from Colombes, a suburb of Paris, currently wears a chunky Seiko watch and is mulling a tech upgrade. “It’s a new product. I came to see what it’s like,” he said as he awaited a 9:30 a.m. appointment to actually try one on.

“I like it. It’s elegant – not as imposing as I thought,” Chloé Dupuy, a 22-year-old project manager, said after trying on a style in rose gold and expressing surprise that the device also tells the time. Dupuy currently wears a Nixon timepiece, though she wasn’t sporting it on Friday.

According to Apple, Shijia Wang, a student from Germany, was the first customer to enter Galeries Lafayette at 9 a.m. Friday, having camped out since 1 p.m. the prior afternoon. She was joined later by a gentleman from Antwerp, Belgium.

The department store on the Boulevard Haussmann, which welcomes 47 million visitors a year, afforded the Apple Watch prime real estate nearby stands for Dior perfumes, Pomellato jewelry, and fashions by Marc Le Bihan and Zadig & Voltaire.

The Apple Watch shop unfurls in stages, with shoppers first alighting on the entire product range encased in a hulking wooden table, then passing on to tablet devices that demonstrate the functions and graduating to actual try-ons.