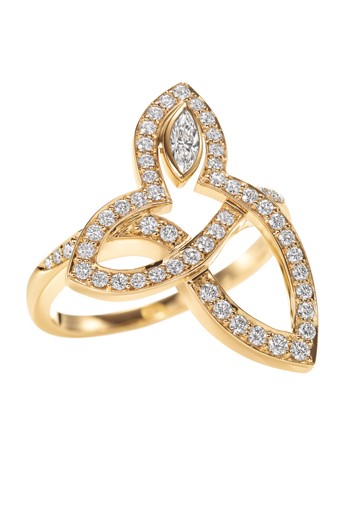 ARCHIVAL ENTRY: In May, Harry Winston is set to launch a new diamond, platinum and yellow gold collection, Lily Cluster, inspired by a Forties floral motif pulled from the company’s own archives. The news here: It’s the first time the company has offered designs in flaxen hues — aside from the occasional special request — since the Nineties. “The best way to set a diamond is with platinum and with a minimum of metal,” explained Sandrine de Laage, vice president of design and creative director. “But this specific design was very fresh, light and playful. It [feels] younger and was very appealing in yellow gold.” In keeping with that youthful vibe, the collection, priced from $4,900, will also introduce the house’s first hair accessory outside of the tiara: a diamond and platinum barrette. The Lily Cluster ad campaign, shot by Patrick Demarchelier, will feature Freja Beha Erichsen.

According to a market source, the units will be called Lord & Taylor Home and will be “upscale specialty stores featuring high-quality merchandise in the kitchen, bedding and bath categories.” The source further described the two stores as “tests” to be merchandised by Home Outfitters, a Canadian retail division of the Toronto-based Hudson’s Bay Trading Co., which also operates Lord & Taylor.

Over the years, Lord & Taylor has dabbled in home goods but last fall took a more serious step when the Fifth Avenue flagship in Manhattan reconfigured its ninth floor into a home department with merchandise from Calvin Klein, Ralph Lauren and Jonathan Adler, among other brands.

THREE FOR TRUSSARDI?: Rumors have been circulating in Milan that in the style of Gucci circa 2004, Trussardi will have a triumvirate of designers heading up the Italian luxury brand’s women’s ready-to-wear, men’s rtw and accessories lines after the recent parting with creative director Milan Vukmirovic. Industry speculation points to Umit Benan and Andrea Incontri as having have been tapped to helm the latter two sectors respectively, while the successor for women’s wear has yet to be revealed. All parties involved declined to neither confirm nor deny the talk.

FIRST LOOK: Allen B. Schwartz is getting a head start on the competition. Philanthropist, jewelry designer and author Nancy Davis asked Schwartz to design a dress, inspired by Kate Middleton’s wedding gown, to be auctioned off for charity Friday night. The event is The 18th Annual Race to Erase MS, which takes place at the Beverly Hilton in Beverly Hills. Schwartz explained that during the finale of the celebrity fashion show, “There’ll be a look-alike of Prince William in uniform and one of Kate in the wedding dress coming down the runway.” It’ll be a long day for Schwartz, who plans to wake up at 3:30 a.m. to start sketching with his design team, in order to produce the wedding gown by that evening. “This wedding is very healthy for the business. You’re not just talking about Lindsay Lohan. You’re talking about royalty,” said Schwartz.

WINSLET’S ST. JOHN: Kate Winslet has signed on as the new face of St. John for fall 2011. She joins a list of beauties, including Gisele Bündchen, Angelina Jolie, Karen Elson and, of course, the original, Kelly Gray, who have fronted the knitwear brand. The campaign, which is being shot today in New Jersey by Craig McDean, will drop in September books.

DOUBLE DUTY: Designer Derek Lam made the most of his brief stay in Chicago earlier this month, pulling in more than $100,000 at a trunk show for his line at suburban Neapolitan boutique and then enjoying a dinner with clients at Chicago’s Sunda restaurant. The next evening Lam, who is Tod’s creative director, hosted a party along with actress Jennifer Beals (recently named one of People magazine’s Most Beautiful) christening a newly renovated Tod’s on Oak Street followed by private dinner at Art Smith’s Table 52. The Chicago area’s well-heeled turned out for both events with some not realizing Lam’s connection to Tod’s. No matter, partygoers scooped up Tod’s $1,500 limited edition apricot-colored totes made especially for the Chicago store reopening, with many women placing orders weeks ahead to nab one of the 35 handbags.

NEW GIG: Stephanie Zernik, who for about two dozen years drove accessories and other categories at Bloomingdale’s and Macy’s, has joined Chanel as senior vice president of wholesale.

RESCUE MISSION: The International Polaroid Collection — 4,400 works from 800 artists — has been saved by the Vienna-based Museum of Photography. For the past two years, supporters of The Impossible Project have been lobbying to save snapshots by Andy Warhol, Ansel Adams, Mary Ellen Mark, Sally Mann, Helmut Newton and others. Compiled by Polaroid between 1972 and 1990, the collection was temporarily lost in the archives of the Swiss Musée de l’Elysée in Lausanne for 20 years.

The WestLicht’s owner Peter Coeln, who is an Impossible Project investor, rescued the collection from being sold by Polaroid’s liquidators. A selection of these iconic images and more shot by contemporary artists on Impossible instant film will be showcased in an exhibition at the WestLicht June 17.

HICKEY FREEMAN POPS: Hickey Freeman is showing its charitable side. The men’s tailored clothing company has designed a tie for the New York Pops and has donated 36 of them to be auctioned off during its annual gala on Monday, May 2.

Hickey, which dresses New York Pops music director Steven Reineke, also is outfitting 11 boys from the orchestra’s free instrumental lessons programs with Hickey Freeman shirts they will wear while performing at the pre-gala concert at Carnegie Hall on Monday.

In addition, the apparel manufacturer has donated a father-and-son shopping experience at its Hickey Freeman flagship in Manhattan, which also will be auctioned off at the event. The winning bidder will receive one men’s and one boys’ made-to-measure suit.